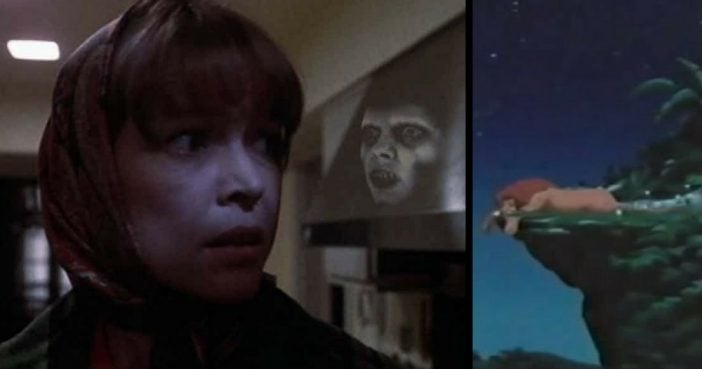 In 1957, the first messages encouraging moviegoers to buy Coca-Cola and popcorn were spliced into movie theater film strips, and audiences did just that. The age of subliminal messaging in entertainment was born, and has been used as a running gag in movies like Fight Club, or as a genuine attempt to influence audiences without them realizing it.

Did you know that Cloverfield contains a King Kong cameo? Matt Reeves’ found footage monster movie is well known for its shaky, stuttering handheld camcorder, and in between cuts and flickers the director inserted single frames from classic monster movies like King Kong, The Beast from 20,000 Fathoms and Them! Whether they were put there to disturb the audience without them realizing it, or just as an homage to the kind of movies that inspired Cloverfield, these flashes are a fun subliminal secret that can only be seen if you slow the scenes down.

Gore Verbinski’s remake of this Japanese horror film takes the idea that watching movies affects us, and stretches it to a terrifying extreme. The meta concept is reinforced when single frames from the haunted videotape flash up during other scenes in the movie. Again, not all copies of the film feature the same frames. But fans can all catch a flash of The Ring at the very start of the movie, where it meshes with the crescent moon in the DreamWorks logo. These hidden frames are worth re-watching the movie all on their own – just don’t answer the phone when you’re finished.

Subliminal messaging isn’t always about advertising. Some filmmakers use it to try and create a certain emotional effect on their audience, without them consciously knowing why they felt that way. The first thirty minutes of Gaspar Noé’s film Irreversible contains an extremely low-frequency background noise that is virtually inaudible to humans, but capable of causing uneasiness and nausea. Noé deliberately inserted the noise into his soundtrack to make people feel sensations of disgust while watching his movie. But trust us – it’s far from the only disturbing part of the movie.

What famous horror film is next? Click “Next” to find out.