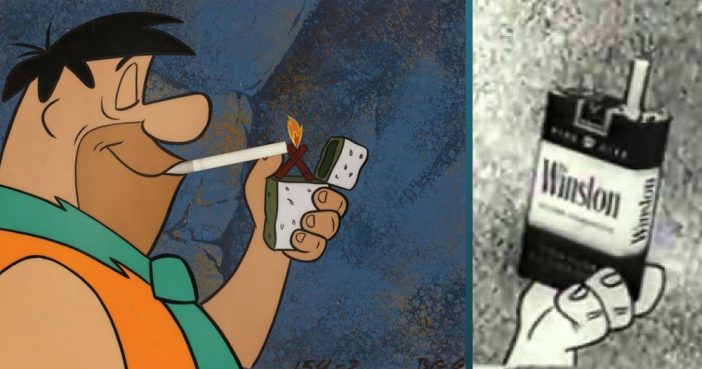 Among all the cartoon characters that have ever been used to sell products, it’s perhaps a bit puzzling that a pre historic family appears to have been the most popular. In this particular scenario, it’s the fun and loving Flinstones.

Way beyond their brand of vitamins, The Flintstones have used their clout to advertise products that most definitely did not exist during the Stone Age: Winston Cigarettes, Kentucky Fried Chicken and Dove, to name a few.

But historical accuracy was never a strong point for the popular prime-time show, which ran for six seasons from 1960 to 1966 (and continued in syndicated heaven for decades after). After all, Fred and Co. regularly celebrated Christmas.

When the show first aired, Winston Cigarettes was a presenting sponsor. That might have been because network execs were marketing the show to adults. Remember, Fred and Wilma were one of the first couples to appear in bed, on-screen, during prime time (the show even implied that Barney and Betty had trouble conceiving children, leading to their adoption of Bamm Bamm). And the ads also threw in a bit of sexism: in one of them, Barney and Fred watch their wives do a whole load of chores. “I hate to see them work so hard,” says Barney. Fred suggests going round to the back of the house so they won’t have to watch anymore, where they promptly light up.

These were the times when commercials were integrated in the middle of the action — call it the 1960s’ version of native advertising. Grape jelly goes well with cigarettes, apparently. One commercial-in-a-commercial spot showed Fred watching television when a Welch’s Grape Jelly spot came on. Pebbles, Fred and Wilma’s baby girl, asked for grape juice (although the brand wasn’t explicitly mentioned) during the show, and the company even sold special glass jars with scenes featuring the characters.

Miles Laboratories (now Bayer), the makers of Alka Seltzer, had Fred call out to his unseen “Ma,” asking her where the antacid was. It introduced its Flintstones vitamin brand in the late 1960s.

For more commercials that would immediately be turned down nowadays, click “Next.”

Page Page 1 of 3
Previous article: Find The Elephant In The Room-Marilyn Monroe
Next Post: Do You Remember SPAM..? Did You Grow Up Eating SPAM As A Kid?