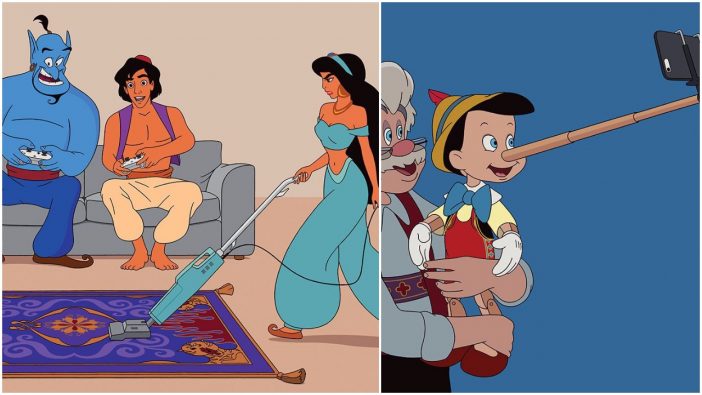 Speaking about his project, Ward said, “I always appreciate visuals that feel familiar but say something new.” He went on:

“Disney characters are so iconic that I thought transporting them to our modern world could help us see it through new eyes, giving me an opportunity to communicate some issues I feel strongly about.”

Ward set about planning the illustrations by questioning what each iconic character would be doing in today’s world. The resulting images are consequently a lot darker in tone than the more innocent cartoons you’ll remember from childhood.

1. Mastro Geppetto and Pinocchio take a selfie: This is pretty self-explanatory. The selfie is probably one of the biggest phenomena to come out of this decade. It’s interesting though that Pinocchio is able to use his nose as a selfie stick, indicating he’s been lying quite a bit.

2. Gaston and LeFou: This is a nod to the new ‘Beauty and the Beast’ in which LeFou has romantic feelings towards Gaston. This photo is a progressive reimagining of the classic film and is probably the only image that isn’t disturbing in the collection. #

3. Genie and Aladdin play video games as Jasmine vacuums: This picture depicts Aladdin not paying Jasmine any mind playing FIFA with his friend. It appears that Jasmine isn’t too happy having to do chores alone.

4. Robinhood aiming an arrow at Hunters: This reimagining could potentially be turning the hunter-animal relationship on its head. The animal is now the hunter and the Hunters are the hunted.