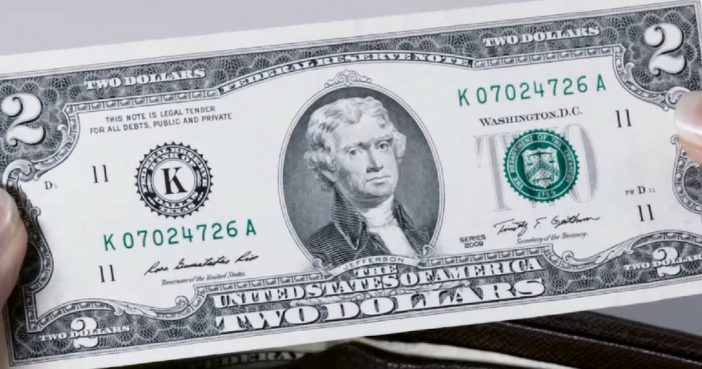 “The $2 has a sketchy past. Shortly after Independence, the Federal Reserve started printing money, but only issued coins at first due to Americans’ average salary of $15/month. Soon after the Reserve’s predominant use for the “Tom” (nicknamed for Thomas Jefferson’s image) was for gambling, bribes, and prostitutes, so the bill got a bad rap. During the United States Bicentennial in 1976, the Reserve started to reproduce “Toms,” but made such beautiful bills that people didn’t want to spend them, thinking that they’d increase in value somewhere down the line. Today, the bills still exist but comprise a fraction of all bills printed by the Federal Reserve. There are even $2 ambassadors, who visit banks to ensure that the “Toms” remain in circulation.” (YouTube)
The funny thing about $2 bills is that when people talk about them—and they do talk about them, in a niche but thriving community—there seems to be a step missing in the logic. And that step is the first one. Everyone who deals with American money—even people who dedicate very little thought to the matter—knows that $2 bills are something worth commenting on. They’re something worth commenting on because they aren’t seen very much. They aren’t seen very much because they aren’t printed very often. They aren’t printed very often because people are disinclined to use them. People are disinclined to use them because they are thought to be special—or sometimes even fake—because of how rare they are. And now we have come full circle without establishing how this thinking got started.