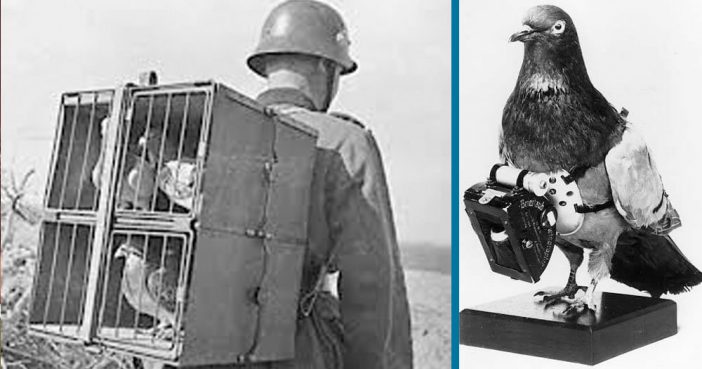 Animals have served alongside humans in the military since ancient times. Just like humans they also risked their lives, and many of them died alongside their armies.

Throughout history, there are many stories of animal war heroes who played crucial roles and proved to be just as dependable as soldiers. One such story is the story of a pigeon named Cher Ami.

More than 200,000 pigeons were enlisted in the U.S. Military During World War I and World War II. They delivered many vital messages, and by doing it they saved the lives of thousands in WWI and WW2. One such pigeon was Cher Ami (“Dear Friend” in French), who helped save the lives of nearly 200 American soldiers who were stranded behind enemy lines in France, back in 1918.

It was during the battle of Argonne, the greatest American battle of the First World War when 500 American soldiers became stranded behind enemy lines. They had no food and no ammunition and suffered heavy losses since the Germans surrounded them. To make things worse, they were also exposed to friendly-fire since the Allied forces thought that they were the enemy.

It all started on October 3, 1918, and by the second day, more than 300 American soldiers were killed. There was not much hope for the remaining 194 soldiers that were lucky to be still alive. Their last hope was to try and dispatch messages by one of the three carrier pigeons they had with them.

The first two pigeons were shot down by the enemy, and only one homing pigeon named Cher Ami was left. The desperate soldiers had no other choice and decided to write the final note:

“We are along the road parallel to 276.4. Our own artillery is dropping a barrage directly on us. For heaven’s sake, stop it.”

Cher Ami took off, and while flying across the battlefields she was shot down by the Germans, but she somehow managed to take off again. Besides the fact that she was severely wounded she traveled 25 miles in order to complete her mission and save the lives of nearly 200 soldiers.

Cher Ami arrived in the headquarters’ pigeon loft in just 25 minutes. Covered in blood, with a bullet in the chest, blinded in one eye and hopping on one leg she managed to save the “Lost Battalion.” Finally, on October 7, 194 survivors of the battalion were rescued.

Medics managed to save the life of Cher Ami and even carved a wooden leg to replace the one that was blown off. She became a true war hero and made the headlines in many American newspapers.