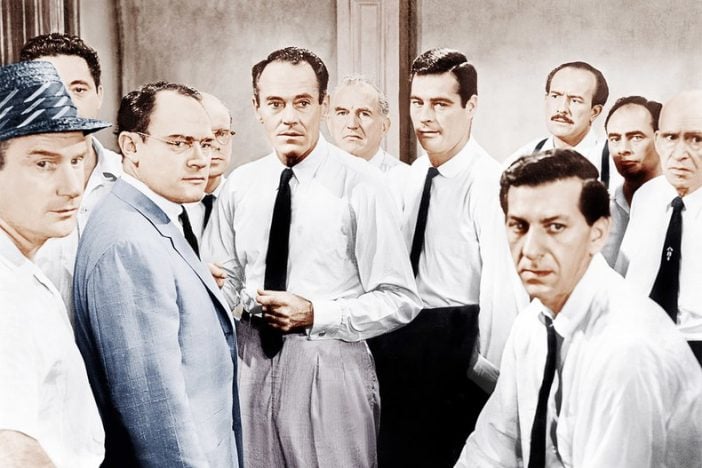 Twelve Angry Men is a drama written by Reginald Rose concerning the jury of a homicide trial. It was broadcast initially as a television play in 1954. The following year it was adapted for the stage, and in 1957 was made into a highly successful film. Since then it has been given numerous remakes, adaptations, and tributes.

Donald Trump’s presidency—and his assault on the basic liberal value of justice—have lent the film a new relevance. What once felt creaky and old-fashioned now burns bright with fresh outrage—and serves as a disconcerting reminder of our own regression.

The 12 ordinary (white) men who congregate in Sidney Lumet’s film have been given the God-like power of determining the ultimate fate of teenage street kid—a minority accused of murdering his father. Their leader, initially, is Juror No. 3—a sour, authoritarian bully played by Lee J. Cobb, who is ready, even eager to send the boy to die. Then Henry Fonda enters as bleeding-heart Juror No. 8, who—in what can only be deemed an outrageous fantasy—uses logic and facts to convince a group of skeptical, angry strangers to agree with him.

Sidney Lumet directed more than 40 films in his half-century career, many of them dealing with issues of social justice and fairness. That includes the movie where it all began, concerning a dozen guys in a humid jury room. 12 Angry Men earned positive reviews and a few Oscar nominations when it was released in 1957, but only later did it become the gold standard of courtroom dramas, a powerful and instructive film that’s been shown in law classes ever since. To celebrate the film’s 60th anniversary, here are some on-the-record facts to illuminate your next viewing.

Previous article: Barrettes
Next Post: A Nostalgic Tour Of The Fisher-Price Farm Playset