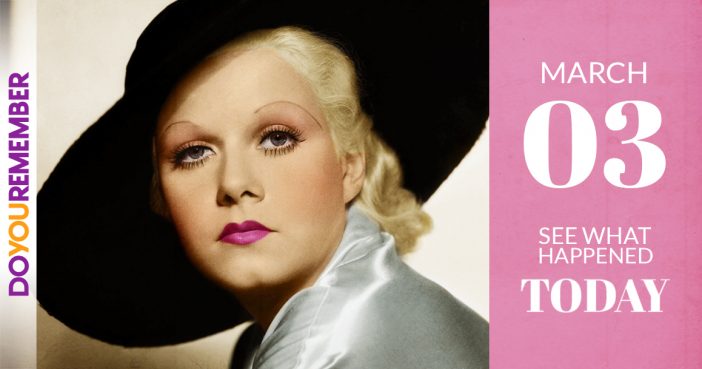 1956 – A handsome singer from Tupelo, Mississippi first appeared on the chart on this date.  His first single was a song called “Heartbreak Hotel” and his name was Elvis Presley.

1962 – Kenny Ball and His Jazzmen moved to #1 on the Easy Listening chart with “Midnight In Moscow”.

1962 –  “Duke Of Earl” by Gene Chandler led the way on the R&B chart for a third straight week.  “Hey!  Baby” by Bruce Channel was second with Dion’s “The Wanderer” coming in third.

1969 – The 5th Dimension released the single “Aquarius/Let the Sunshine In”.

1973 – Roberta Flack cemented her status by winning Song and Record of the Year at the Grammy Awards for “The First Time Ever I Saw Your Face”.  It was the first Grammy show to be broadcast on CBS-TV after the first two shows aired on ABC.

1973 – His career was just underway, but Elton John had his second #1 album, following up Honky Chateau with Don’t Shoot Me I’m Only the Piano Player.

1979 – The Bee Gees owned the top U.K. album with Spirits Having Flown.

1979 – Anne Murray continued to hold on to #1 on the newly renamed Adult Contemporary chart with “I Just Fall In Love Again”.

1979 – Spirits Having Flown, the peak album for the hottest group in the world, the Bee Gees, reached #1 after only three weeks.

1984 – Rockwell with considerable help from Michael Jackson had the new R&B #1–“Somebody’s Watching Me”.

1984 – It was a historic day in the Rock Era as Thriller by Michael Jackson did what no one said could be done–tie the record of 31 weeks at #1 on the Album chart set by Fleetwood Mac’s Rumours.

1990 – Paul McCartney played in the first of six sold-out shows at the Tokyo Dome in Tokyo, Japan.

1990 – It had been four months, since their previous chart-topper but Linda Ronstadt & Aaron Neville had another #1 together on the Adult Contemporary chart with “All My Life”.

1955 – Elvis Presley made his local television debut on The Louisiana Hayride show. The show was broadcast on KWKH-TV from Municipal Auditorium in Shreveport, Louisiana. Presley had been performing on The Hayride since October 16, 1954.

1981 – The acclaimed documentary This Is Elvis premieres in Memphis, featuring former Elvis impersonator Ral Donner doing a voiceover narration as The King.

1984 – The Disney Channel premieres the series The Edison Twins (a popular Canadian program running since 1982 on CBC Television) with the episode “Code Affair.”

1984 – Diff’rent Strokes: “The Honeymoon’s Over” airs on NBC. Mr. Drummond and Maggie return from their honeymoon, and find out that Arnold had been taking advantage of Sam while they were away.

1845 – Florida becomes the 27th state to join the United States of America when President John Tyler (on the last day of his administration) signs into law the act granting statehood to  Florida’s 57,921 inhabitants.

1946 – Bobby Driscoll celebrates his ninth birthday on the set of Disney’s Song of the South. Director Harve Foster and Walt Disney himself present Bobby with a cake.

1957 – The first annual Disneyland Pancake Races kick off for the next 3 days.

1973 – At this year’s Grammy Awards in Los Angeles, the George Harrison-led benefit disc The Concert For Bangla Desh is awarded Album of the Year, while Roberta Flack’s “The First Time Ever I Saw Your Face” wins Song and Record of the Year. Harry Nilsson wins Best Pop Vocal for “Without You,” while Helen Reddy wins three awards for her hit “I Am Woman,” causing a small controversy when she accepts by thanking God – “She makes everything possible.”

1983 – The EPCOT attraction Journey Into Imagination (sponsored by Kodak) debuts.  It will have its official opening 2 days later.

1990 – Waylon Jennings, Willie Nelson, Johnny Cash and Kris Kristofferson perform at the Houston Livestock Show and Rodeo at the Astrodome, kicking off their first concert tour as the Highwaymen

1994 – Kurt Cobain of Nirvana fell into a coma in Italy after taking Valium with champagne.

1995 – The Foo Fighters performed live for the first time at the Satyricon in Portland, Oregon.

1995 – A stalker is arrested after attempting to break into the New York apartment of R&B singer Roberta Flack.

1995 – The Lion King becomes the top-selling home video of all time, selling over 30 million units domestically and surpassing the record set in 1994 by Snow White and the Seven Dwarfs.