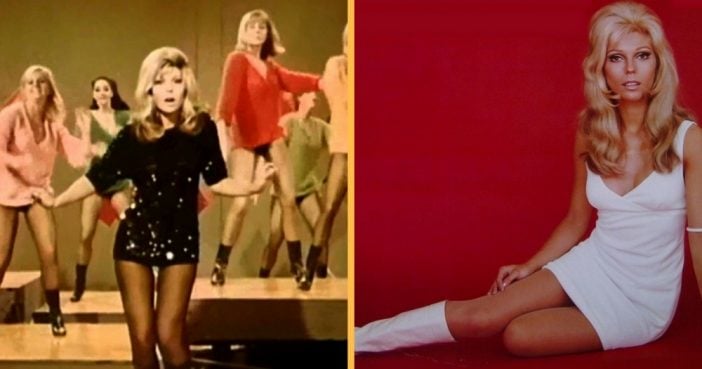 “These Boots Are Made for Walkin'” is a pop song written by Lee Hazlewood and recorded by Nancy Sinatra. It was released on February 22, 1966, and hit No. 1 in the United States Billboard Hot 100 and in the UK Singles Chart.   Subsequently, many cover versions of the song have been released in a range of styles: metal, pop, rock, punk rock, country, dance, and industrial.

Loretta Lynn, Jessica Simpson, Kon Kan, Geri Halliwell, The Residents, Megadeth, Jewel, Operation Ivy, Parquet Courts, and KMFDM also released covers of the song. Leningrad Cowboys titled their version “These Boots”, and released a video of the song, directed by Aki Kaurismäki.   Nancy Sandra Sinatra (born June 8, 1940) is an American singer and actress. She is the daughter of Frank Sinatra and is widely known for her 1966 signature hit “These Boots Are Made for Walkin'”.   Other defining recordings include “Sugar Town”, the 1967 number one “Somethin’ Stupid” (a duet with her father), the title song from the James Bond film You Only Live Twice, several collaborations with Lee Hazlewood such as “Jackson”, and her cover of Cher’s “Bang Bang.”

Nancy Sinatra began her career as a singer and actress in November 1957 with an appearance on her father’s ABC-TV variety series, but initially achieved success only in Europe and Japan. In early 1966 she had a transatlantic number-one hit with “These Boots Are Made for Walkin'”. She appeared on TV in high boots, and with colorfully dressed go-go dancers, creating a popular and enduring image of the Swinging Sixties.  The song was written by Lee Hazlewood, who wrote and produced most of her hits and sang with her on several duets, including the critical and cult favorite “Some Velvet Morning”. In 1966 and 1967, Sinatra charted with 13 titles, all of which featured Billy Strange as arranger and conductor.

Sinatra also had a brief acting career in the mid-1960s including a co-starring role with Elvis Presley in the movie Speedway, and with Peter Fonda in The Wild Angels. In Marriage on the Rocks, Frank and Nancy Sinatra played a fictional father and daughter.

Nancy regretted the song, saying in 1971, “The image created by ‘Boots’ isn’t the real me. ‘Boots’ was hard and I’m as soft as they come.” But then Lee had written the song for himself: “It was a party song I had written 2 or 3 years before that. It was a joke to begin with.

Well, Lee was going to record the song himself, but she talked him out of it. Said Sinatra, “When a guy sings it, the song sounds harsh and abusive, but it’s perfect for a little girl.”

In 1996, Nancy Sinatra gave the famous white go-go boots she wore to promote this song to the Hard Rock Cafe in Beverly Hills.

Lyrics to `These Boots Were Made For Walking.’

You keep saying, you got something for me.

You keep playin’ where you shouldn’t be playin’ And you keep thinkin’ that you’ll never get burnt Ah, I’ve just found me a brand new box of matches, yeah And what he knows you ain’t had time to learn

Are you ready, boots? Start walking.