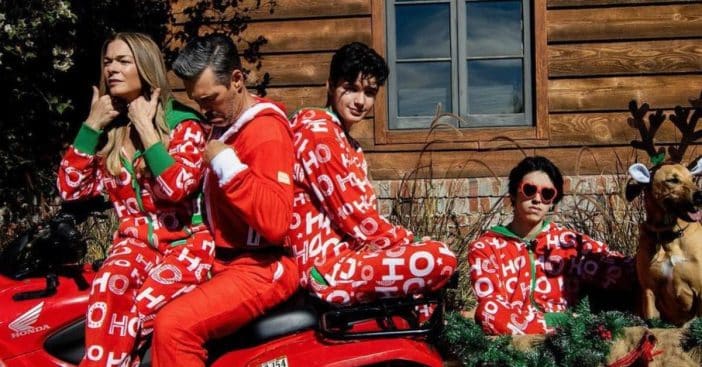 LeAnn Rimes and Eddie Cibrian first met on the set of the 2009 film Northern Lights and immediately hit it off. However, both the country singer and the actor were married to other people at the time — Cibrian was married to Brandi Glanville, whom he shares two sons with, while Rimes was with Dean Sheremet.

Although they initially denied rumors of the affair, by 2009, the costars ended their respective marriages and officially started dating. Despite a rocky start, the couple went on to tie the knot in April 2011. The relationship is still growing stronger and Rimes has become quite fond of Cibrian’s two children.

LeAnn Rimes reveals that she loves being a stepmom

The 40-year-old actress talked about her experience being a stepmom in an interview with Refinery29 in May 2017. She revealed that she has learned a lot from watching Mason and Jake grow up.

“When I was first around the kids, I didn’t know what was expected of me. Little things that were so childlike about them that I didn’t have about me. It’s been a really big learning experience for me. It’s pushed my buttons, which has always made me look and see where I need more healing on myself. It’s been really rewarding to see them grow up, and know that I have a part in that,” Rimes told the outlet. “That responsibility, to help raise kids, it’s something that hits you really hard. It was something I was up for the challenge of. They bring so much joy to my life, and it’s a new experience every day.”

Rimes also disclosed the challenges of being a stepmother and that she celebrates Stepmom’s Day every year with Mason and Jake.

“We go to dinner and do the whole thing. I love the fact that there is a stepmom’s day and an option [for stepparents to celebrate]. It’s so different for each family. I love that we have a separate day and I think it’s important that people know about it,” she revealed. “One thing that I know is, I will never replace their mother. I would never try. I will, however, love them with all I have and do everything in my power to help raise them in a loving, safe, and proper environment. Society will always call me a ‘stepmom.’ In our house, in our family, we remove the ‘step.’ We really are all … simply family.”

Mason was born in 2003 as the eldest child of Eddie Cibrian and Brandi Glanville. He is currently a student at a college in Southern California where he started his freshman year in 2021. Mason is signed to DT Model Management, which is one of the most successful modeling agencies in Los Angeles, California. Despite his recent foray into the fashion industry, Mason has maintained his commitment to his business management and real estate studies.

Recently, Mason celebrated his 18th birthday at STK Steakhouse in Los Angeles with his whole family. The delighted stepmom took to social media to praise the teenager.

“I cannot believe we have an 18-year-old in the house … WHAT?! Happy 18th birthday, Mason!!” LeAnn wrote. “It has been a joy to see you evolve into the young man you are today. You are ridiculously handsome and as witty as they come, but most of all, it’s your massive heart that inspires me the most. It’s an honor and a blessing to be your stepmom. Here’s to the rest of your life!”

Jake Austin Cibrian was born in 2007. Rimes disclosed to Entertainment Tonight in 2015 that the 15-year-old has a passion for music, which helped LeAnn  during the production of her Today Is Christmas album.

Click for next Article
Previous article: Mom Outraged After School Call’s 7-Year-Old’s Outfit With Straps “Inappropriate”
Next Post: Rita Wilson Says She Always Put Her Kids Before Her Career