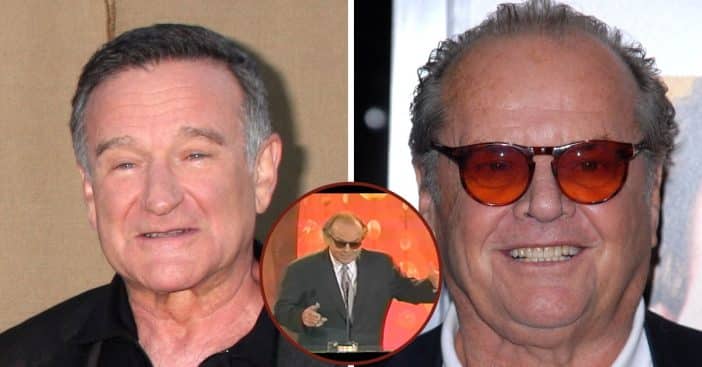 In the early 2000s, Hollywood had fewer checks, and few things were considered to be inappropriate. Actors leveraged this to exhibit a lot of infamous behavior. This decadence influenced the awkward event that occurred at the 8th Annual Critics’ Choice Awards in 2003.

Jack Nicholson and Daniel Day-Lewis jointly won the award for Best Actor category for the movies, Gangs of New York and About Schmidt, respectively. However, Nicholson came unprepared, as he was too stoned and uncoordinated to give a speech. Thanks to Robin Williams, there was a quick cover-up, and the situation was salvaged.

Salma Hayek, 37 at the time, announced the category winner and called them to come forward and give their speech. “I’m going to call the first name. This wonderful person can come up here and say thank you,” Hayek hinted, “and then I will say the second name, so there’s going to be so much dramatic tension.”

RELATED: Disney Paid Robin Williams Next To Nothing For ‘Aladdin’

Salma declared Day-Lewis as a winner. The actor went onstage, expressing his gratitude to now-disgraced producer Harvey Weinstein, co-stars Leonardo DiCaprio and Cameron Diaz, and “the patron saint of shoemakers.”

Jack Nicholson was also announced as the other winner of the category. However, the unexpected happened when he stepped out to the podium to address the audience. Nicholson, who appeared to be heavily stoned, was seen rocking a black shade in the hall, and as soon as he began his speech, he started stuttering and couldn’t finish his lines.

Luckily, he made the right call with Robin Williams, who saved the day. “Well, I don’t usually get this baked when it’s on television,” he said. “… but I really, this is what’s so great about this because my speech was to say, look, it is on television. Robin, would you come up and give. Would you give the funniest acceptance speech I ever gave?”

Robin Williams turned an awkward situation into a memorable one

To put a band-aid on the looming situation, Robin Williams stepped up and tried to give meaning to Nicholson’s thoughts. After the former successfully gained the audience’s attention back, he bantered with Nicholson, and the duo entertained the crowd with hilarious comments.

“What Jack is trying to say here,” Williams said, taking the initiative, “is that he’s so happy to be here he could drop a log, really. Right now, he wants to thank Jeffrey Katzenberg for the lens.”

“And the seats,” Williams continued, “… and way to go. Hopefully, Shaq kicked his ass tonight, but Jack, say it more because you’re dressed up tonight and wearing the sunglasses inside works even better.”