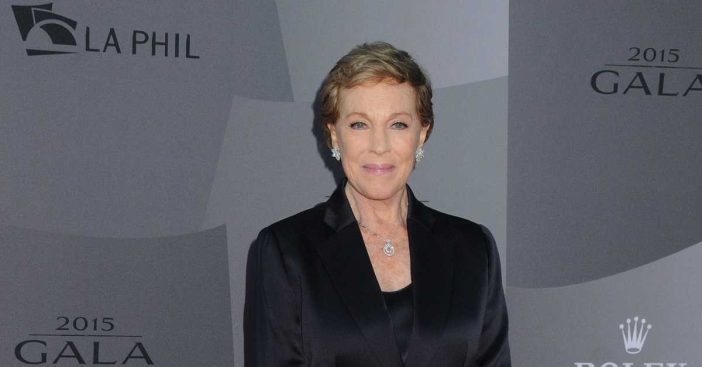 86-year-old actress and singer, Julie Andrews, was honored by the American Film Institute for an incredible career which was kick-started with a lead role in Mary Poppins. This movie was an instant success, winning her the Academy Award for Best Actress.

The award ceremony was originally programmed to take place in the spring of 2020. Still, it was postponed because of the COVID pandemic that crippled most activities worldwide, especially mass gatherings. Also, the event was eventually held at the Dolby Theater in Hollywood with the same pomp and pageantry that have always accompanied it since it was founded by George Stevens Jr.

The ceremony was well attended by guests, which included five surviving cast members of The Sound of Music, a movie in which she starred who played the role of the Von Trapp children: Nicholas Hammond, Debbie Turner, Angela Cartwright, Kym Karath, and Duane Chase as well as her old-time friend Carol Burnett. Julie and Carol have maintained a friendship that goes beyond work for close to sixty years.

RELATED: This Stunning Medley Between Julie Andrews & Mama Cass Is Giving Us All Chills

A video of a condiment-smearing food fight culled from an earlier television show featuring both of them was shown to the guests at the event. The video, which was aired just before the tribute given by Burnett to Andrews, showed that Julie Andrews initiated the food fight.

While paying her tribute, she eulogized Andrews, who was made a dame in 2000 by Queen Elizabeth II for her services to the performing arts; she noted that the 86-year-old merited the award. “Her talent unsurpassed; her voice is a gift from the gods,” she said. “You’re a great dame in every sense of the world. I love you. Congratulations, Chum,” she stated while facing Julie.

Other Guests Showers Encomium On The Living Legend

Throughout the event, praises were showered on Julie by guests who were present and those who were not in attendance. Steve Carrell has also starred with the legend in the Despicable Me franchise, saying, “It’s a miracle when you meet someone who is an authentic legend, and they not only live up to your expectations, they exceed them. She’s the epitome of grace and elegance. She’s kinder and funnier. She’s even better than you hoped she would be.”

American Singer Gwen Stefani, who was also in attendance, commented from the stage that she was inspired by The Sound of Music which she watched as a girl. “I would not be me without the inspiration of Julie Andrews. I’ve got to pinch myself right now because this is crazy,” she said. Co-star Dick Van Dyke and actress Anne Hathaway also sent their tributes via video.

Carol Burnett remembered how they both met in 1960 and how they immediately began their age-long friendship. Andrew had already gained Broadway prominence through three shows (The Boy Friend, My Fair Lady, and Camelot), while Carol was also gaining attention from CBS’s The Garry Moore Show.

“Julie and I never stopped talking that evening. It was as if we had always known each other. And that evening kicked off, what has been a six-decade-long relationship, professional and personal,” she said. She also recalled Julie and Carol at Carnegie Hall, their first TV special in 1962, and how they had become very close and had deep conversations on changes that occurred in their lives through the years.

“During the rehearsal breaks in the 1980s, we talked about hot flashes and hormones; if we ever do another one, it will be a Metamucil musical,” Burnett said.

Click for next Article
Previous article: At 71, Amy Madigan From ‘Uncle Buck’ Takes Her Work Home With Husband Ed Harris
Next Post: Tommy Chong Will Reprise His ’70s Show’ Role In Sequel Series ‘That ’90s Show’