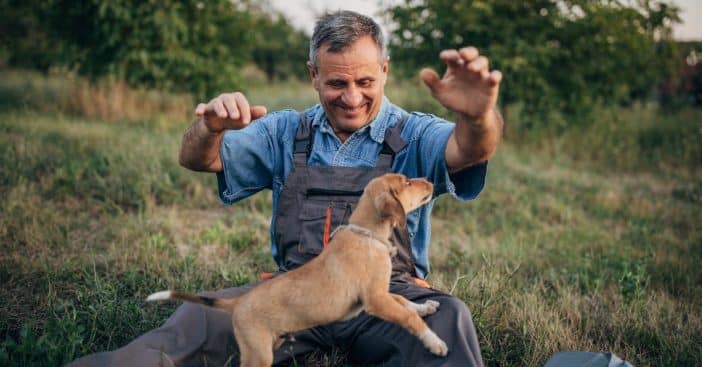 Two decades ago, Alex Wolf and his roommates went to a dog shelter intending to get a big-sized dog; instead, the trio came home with a 16- pound pooch whom Alex would experience the following years of his life with. The lucky pet Gino was only twenty-four months old when the students adopted him.

Born on September 24th, 2000, Gino, formerly named Pee Wee, was a shelter dog at the Humane Society of Boulder Valley. Alex was only a sophomore at the University of Colorado Boulder when his pet entered his life in 2002. Alex tells Today that he has enjoyed having Gino around all through the years, “He’s been there every step of the way. I’m so glad we got him. He’s the best.”

The 22-years and 60-days-old dog has watched his guardian, Alex, evolve through life experiences for over twenty years. When Gino was brought to the room of the students, he knew he had found a place to call home. The trio, who were skateboarders and snowboarders, easily influenced him to run around in the snow in their backyard. Gino also loved being the center of attention, as his favorite spot was under the coffee table when guests came over.

Gino, however, has a soft spot for Alex, “If we were having a later night, he would stay up, and if I was sleeping in, he would sleep in. He was one of the guys.”

When Alex took his dog home for the summer holidays back then in college, Gino began to live the luxury dog lifestyle. “When he was younger, he used to love exploring my parents’ huge backyard with our other dogs in Manhattan Beach, going on walks off the leash in Venice, going on drives along the coast blasting music with his head out the window, or running around on the golf course in La Quinta.”

Gino left Alex for some time

Alex knew he’d have to leave his pet in his parents’ Southern California Home to be properly taken care of while he finished his education. His reason was it seemed like “the more responsible thing to do at that point.”

Over the years, Gino had watched Alex make major life decisions, including graduating from college, renting his apartment, investing, and buying a house. He was also with him in the journey of finding his current girlfriend, Rebecca Grenell. The dog has never failed to make Alex happy, “He makes us laugh every day.”

Although the life expectancy of dogs is 12 years to 15 years, Gino has managed to live healthily for over two decades. Alex says on this, “I give him all the credit. He’s gotten a lot of love, and I think he’s just a strong dog.” His long life has also been attributed to his carefully curated diet, which includes human-grade food, veterinary care, and love and support from family and friends.

Click for next Article
Previous article: Woody Harrelson And Michael J. Fox Once Drank Cobra Blood Together
Next Post: Paul McCartney Points To The Two Modern Musicians That He Loves