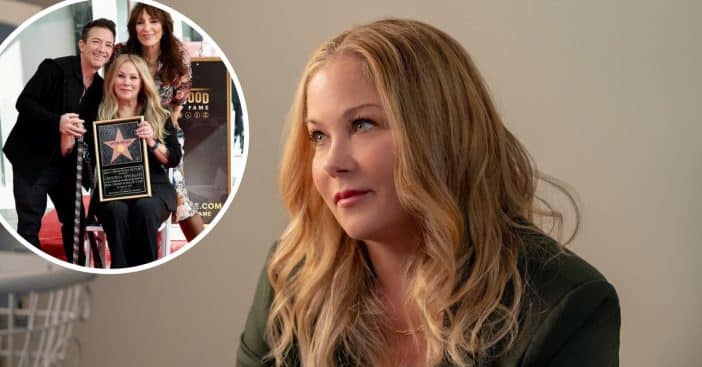 Christina Applegate was honored with a star on the Hollywood Walk of Fame. She appeared to accept the prestigious award and made her first public appearance since being diagnosed with multiple sclerosis (MS) last year. Her Married… With Children co-stars Katey Sagal and David Faustino appeared and helped her physically during her speech. She now walks with a walking stick due to her MS struggles.

The 50-year-old shared, “I can’t stand for too long so I’m going to thank the people I really need to thank.” She shared that Katey was there to help her but joked that it is “so Katey to steal [my] thunder.” Christina also thanked her 11-year-old daughter, Sadie, and her husband Martyn LeNoble, who were nearby.

Christina Applegate received a star on the Hollywood Walk of Fame

Christina Applegate gets her star on the Hollywood Walk of Fame. Pictured here within her costars from “Married With Children”, David Faustino and Katey Sagal. pic.twitter.com/qm23ogebOG

During her speech, Christina cracked a few jokes but also alluded to the end of her acting career. Best known for her roles in Married… With Children, Anchorman, Up All Night, and her most recent show Dead to Me, she admitted that she can no longer do long days on set with her health challenges. She does plan to continue producing.

RELATED: Christina Applegate On She And ‘The Sweetest Thing’ Co-Star Selma Blair Both Having MS

Katey added, “You know, sweetheart, some of us come into this life requiring broad shoulders because what’s coming at us needs support to bear it. Broad enough to hold what shows up. I’ve seen you — the high highs, the love and enormous success, coupled with extreme challenges. But you came in with those shoulders, and you bear the weight and you bend and you don’t break. I continue to love you, laugh with you and to learn from you. … You are not alone. We’re all here. We love you.”

Prior to the award ceremony, Christina admitted that she was nervous to attend. It was supposed to take place in 2020 but was delayed due to the pandemic and Christina’s health issues have increased since then. However, she was extremely happy about the star and called it a “longtime goal.” She added, “This is something that is going to be there forever. And it’s something my daughter can go see when I’m gone.”