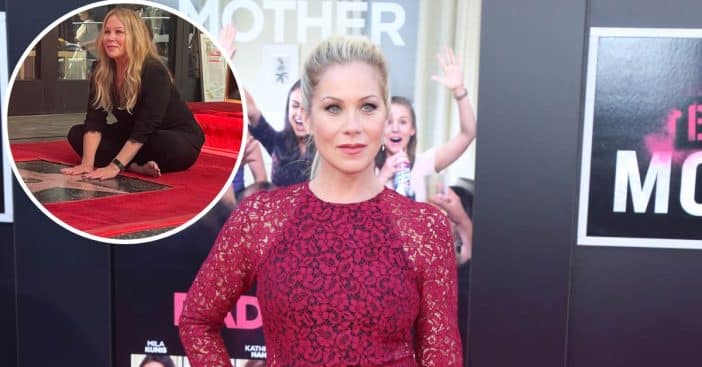 Some celebrities have shocked their fans with out-of-the-ordinary behavior once in a while just for the thrills. However, the case of Christina Applegate, who recently received her Hollywood Walk of Fame star without shoes on, was due to an underlying medical condition, Multiple Sclerosis.

The 50-year-old actress’s appearance at the Hollywood Walk of Fame marked her first public outing since she was diagnosed with multiple sclerosis in 2021. Christina rocked a beautiful black pantsuit and had her hair in a loose wave that complemented her outfit. She, however, decided to go shoeless with a black manicure doing justice to her feet.

Christina explains the reason for her action

The mother of one walked with the aid of a cane and was duly assisted by some of her colleagues like Katey Sagal and David Faustino, who were on standby as she got her award. Due to the perceived shock from fans about her action, Christina took to her Twitter to give insight into what informed her behavior.

Christina stated that she chose comfortability over elegance at the event because of her medical condition. “Barefoot. For some with MS the feeling of shoes may hurt or make us feel off balance. So today I was me. Barefoot,” she explained. “Oh, by the way, I have a disease, Did you not notice? I’m not even wearing shoes. Anyhoo, you’re supposed to laugh at that.”

Fans give support to Christina

In response to her tweet, fans sent their heartfelt wishes and support for the child star. An Instagram user commented, “You’re a queen and you owe no one an explanation.”

Someone who paid close attention to her feet noted, “And your toes look awesome. So, you still nailed it.” While an excited fan also reacted with, “GREAT to see your sweet feet rockin’ direct contact with your delightful new STAR !!! WooooHoooooo !!! 💥❤️🦶🏼⭐️🦶🏼❤️💥.”

While giving her speech at the event, Christina took time out to appreciate the opportunity of being a mother to her 11-year-old daughter Sadie.

“You are so much more than even you know. You are so beautiful and kind and loving and smart and interesting,” she said, “and I am blessed every day that I get to wake up and take you to your school.”

Click for next Article
Previous article: Phil Robertson Shares A Powerful Video Message For Veteran’s Day
Next Post: When The Late John Aniston’s Final ‘Days Of Our Lives’ Episode Will Air