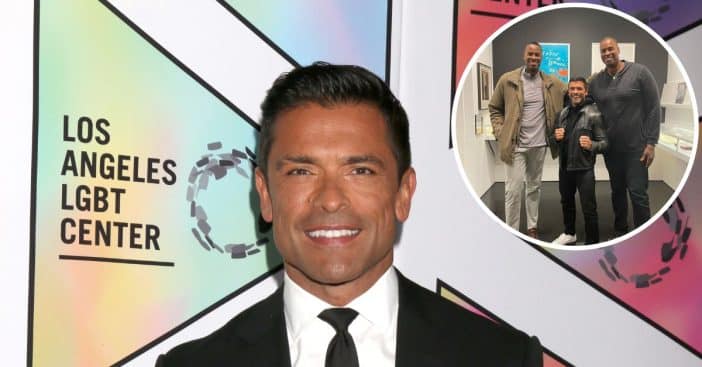 Whether celebrating family and friends or taking a line from a horror movie to use as an Instagram caption, Mark Consuelos has never been known to be the unfunny guy in the room. The usual hilarious interaction between him and wife Kelly Ripa, or his fans, is never a miss on his Instagram page.

The Riverdale alum recently posted a photo on Instagram where he stood with fists ready, standing between the twins, Jason and Jarron Collins, both retired athletes. His caption reads: “Former soccer player vs former basketball player…..not sure why I have my fists up…..I was concerned they were going to put me in a Bjorne”. This made his fans drop surprising and funny comments on the post.

Mark Consuelos may not be as tall as we all thought

From pictures on his Instagram page, no one would have thought Consuelos to be a bit lacking in height. But standing in the middle of 6’11 Jason and 7’0 Jarron, fans realized their favorite All my Children star is below 6’0! A surprised fan says, “Now am curious, how tall are you?”

RELATED: Kelly Ripa And Mark Consuelos On Why They Don’t Celebrate Valentine’s Day

While fans were questioning whether Google was correct about the Riverdale star’s height, Kelly Ripa, Consuelos’ wife of 26 years, seems to love her husband’s pose as she comments, “Action figure vibes (heart-eyed emoji).”

Meanwhile, the Murphy Brown star, Faith Ford, supports Kelly’s appreciation as she comments, “Ok, but seriously! You got the stance!” The 51 years old actor simply replied to a comment with a simple acronym, “BDE.” From the meaning, it sounds like a message to his fans that his lack in height doesn’t depreciate his self-value.

Mark and Kelly as Morticia and Gomez Addams for Halloween

For this year’s Halloween celebration, Mark and his better half, Kelly, dress up as Morticia and Gomez Addams of The Addams Family. The parents of three pull off this look perfectly as they look almost like the original characters. Their fans were highly impressed with this imitation, with one commenting, ”Mark should have been cast as Gomez in the movie!”

Except for a fan who was concerned about Kelly’s stomach more than her hair and makeup, “I don’t even understand where your organs are.” Other Instagram users were quite impressed with the efforts put into the costume and makeup.

Click for next Article
Previous article: Comedian Eric André Gets Creative With Hoda Kotb Halloween Costume
Next Post: See What Elvira, Mistress Of The Dark, Looks Like Now