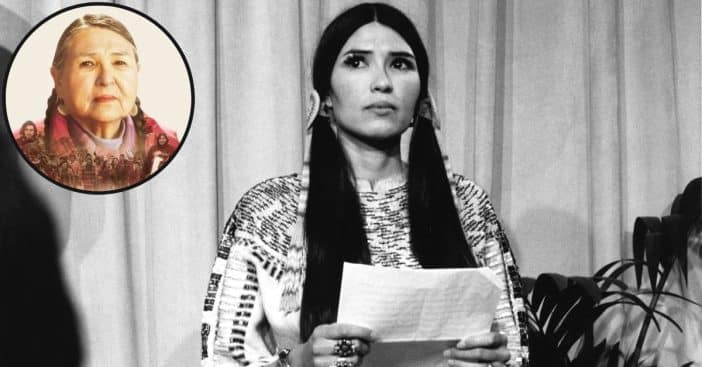 Sacheen Littlefeather is officially and formally being apologized to by the Academy for her mistreatment at the 1973 Oscars. The first time Sacheen took the stage at the Oscars, she was booed and mocked off the stage, and even threatened with arrest and physical assault. Now, 50 years later, she’s being invited back by the Academy as a guest of honor for an evening of reflection at the Academy Museum.

“I was stunned. I never thought I’d live to see the day I would be hearing this, experiencing this,” Littlefeather, now 75, says of receiving the Academy’s formal statement and invitation. “When I was at the podium in 1973, I stood there alone.”

The Oscars apologize to Sacheen Littlefeather for 1973 Oscars mistreatment

During the ’73 Oscars, Littlefeather, who was 26 at the time, took the stage to decline Marlon Brando’s Best Actor Award on his behalf. “[Brando] very regretfully cannot accept this very generous award,” she said at the time. “And the reasons for this being are the treatment of American Indians today by the film industry [the audience begins to boo] — excuse me — and on television in movie reruns, and also with recent happenings at Wounded Knee.” It was just a month before this ceremony that the activist organization American Indian Movement had occupied the South Dakota town of Wounded Knee to protest the sustained mistreatment of Native Americans.

Her plea for justice resulted in relentless backlash—to the point where John Wayne needed to be restrained by security. “The abuse you endured because of this statement was unwarranted and unjustified,” says then-Academy president David Rubin in the formal apology letter at the time, which was June 18th. “The emotional burden you have lived through and the cost to your own career in our industry are irreparable. For too long the courage you showed has been unacknowledged. For this, we offer both our deepest apologies and our sincere admiration.”

The statement of apology will also be read in full at the upcoming Academy Museum ceremony. It will be Littlefeather’s first-ever visit to the museum, where they also have a photo of her on display in the Academy Awards History gallery.

Click for next Article
Previous article: ‘The Little Rascals’: The ‘Curse’ That May Have Haunted the Cast Through the Years
Next Post: Paulina Porizkova Hits Back At The Plastic Surgeon Who Allegedly Said Her Face ‘Needs Fixing’