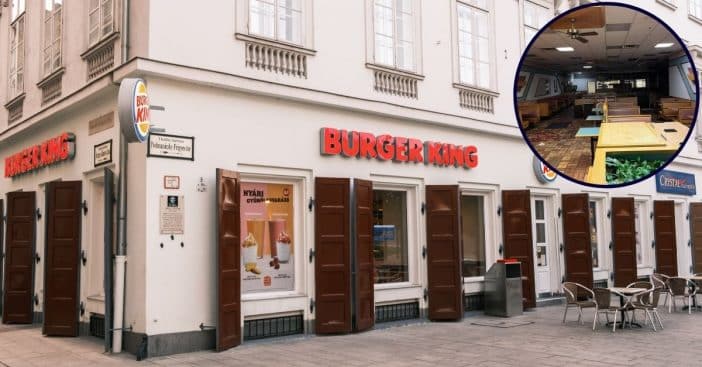 A recently discovered old Burger King was found behind a wall in a shopping mall in Wilmington, Delaware. The vintage restaurant was found well preserved, looking almost untouched and without blemish. Fast-food fans aired their thoughts and expressed their wonder about the released photo of the old-time find.

The tweet, which contained the photo of the recently discovered Burger King, has over 18,000 retweets and 187,000 likes and counting. The photo was shared by a Twitter user who goes by RealJezebelley. She tweeted alongside the picture, “A fully intact vintage Burger King was found behind a wall at the Concord Mall in Wilmington, DE. This photo was snapped by Jonathon Pruitt in April of 2022.”

A fully intact vintage Burger King was found behind a wall at the Concord Mall in Wilmington, DE. This photo was snapped by Jonathon Pruitt April of 2022. pic.twitter.com/G3V3SnJM3J

Fast-food fans and followers warmed to the comment section of the post to show their curiosity and shock at the well-preserved area. “And the plants are still alive,” someone wrote alongside a GIF reading ‘Gullible.’ The original poster replied, “What if I told you they were fake plants?”

RELATED: Rock And Roll King Elvis Was The Burger King Of His Favorite Fast Food Joint

Another user, who claims the picture reminded him of his visits to the restaurant in his younger years commented, “I have experienced this mall; it was frightening. It was sorta dreamy to me, post-apocalyptic, and you’re walking among the ashes. Also, that old mall aesthetic kinda brings up fond memories of childhood.”

“That’s so crazy! I live here and remember the mall,” another reminiscing commenter added. “It’s probably been closed for about 15 years. I swore something took over the space. I don’t go to that mall much anymore, but I’m def going to look next time I’m nearby, I remember exactly where it was.”

The fast-food front-liner launched its ‘Pride Whopper’ last month to celebrate Pride Month. The special pride burger had the same ingredients as the regular burger except for two equal buns, so you get the beefy sandwich with either two top halves or two bottom parts.

“The Equal Buns campaign was executed by our Burger King Austria team in an effort to highlight equal rights and equal love- through a play on the traditional Whopper build- featuring two identical buns on the two options of the sandwich,” a Burger King spokesman told The Post. “Burger King Austria also serves as an Official Proud Partner and Sponsor of Vienna Pride 2022.”

Their approach to Pride Month had them under fire as customers did not find the meal pleasing. They took to Twitter to air their opinion on the company’s weak choice of Pride products. “Burger King Austria made a Pride burger that’s either two tops or two bottoms. what in straight hell?” Jarett Wieselman, a Netflix employee, tweeted.

However, the agency behind the ad has apologized for its method of recognizing the LGBTQ community. The intended message of the Pride Whopper was to spread equal love and equal rights. Our strongest concern is if we offended LGBTQ community members with this campaign,” Jung von Matt Donau, the German agency that did the campaign, said. “We’ve learned our lessons and will include experts on communicating with the LGBTQ community for future work as promoting equal love and equal rights will still be a priority for us.”