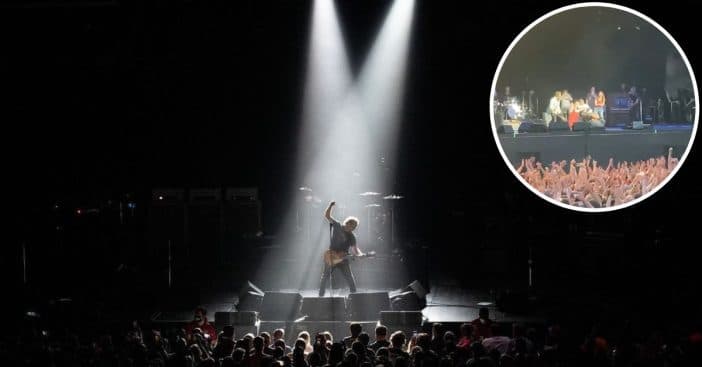 Pearl Jam has always loved coming through for their fans at all times and making them feel fulfilled. The band helped a fan live a magical moment on stage during a performance in their concert in Berlin, Germany, on the 21st of June.

Pearl Jam announced they would be touring Europe in the summer of 2020. The fan, Roland Mandel, purchased the tickets for the 2020 tour in 2019. Unfortunately, COVID came, and the tour had to be postponed; sadly for Roland, he was diagnosed with ALS, a neurodegenerative disease, during that period.

What a moment! We did it everyone. Here’s Roland getting to live out a dream and getting a wonderful ovation. @AxelPicker #RVMforRoland #pearljam pic.twitter.com/LU1z3yM1tv

Due to the change in event and circumstance, Roland couldn’t get the handicap-accessible seat at the concert venue because the available seats had been booked, thus, leaving him frustrated. Roland Mandel’s family and friends quickly took a resolute stance and swung into action by deciding to write a letter to the management of the event venue stating the peculiarities of Mandel’s situation.

Not only that, they decided to launch a social media campaign requesting Pearl Jam to play the teacher’s favorite song, which is the 1993 song “Rearviewmirror,” using the hashtag #RVMforRoland. Surprisingly, their efforts yielded positive results as Roland Mandel was able to get to see the concert from the accessible side of the stage. It did not stop at that because Roland was eventually brought up onto the stage by Eddie Vedder.

A special night for Roland

Even though the teacher’s favorite song of the band was not featured in the list of songs used for the night, things got very exciting for Roland the moment he was brought up on stage by Eddie Vedder and the rest of the band.

Just before Roland was wheeled onto the stage, the band performed a cover of The Ramones, “I Believe in Miracles.” Vedder spoke to the crowd full of supportive cheering, “He should also experience this special night. He worked his ass off to be here tonight… We love you Roland.”

Mandel’s wife was enthusiastic and appreciated the band’s efforts in making her husband enjoy every sing moment of the memorable night. While speaking with the German outlet Taz, she said about the experience for her husband, “It was so unbelievable. He was so excited, so positive, full of adrenaline. This stays for eternity.”

The rock band has announced that there will be some additions to their performance at the BST Hyde Park shows, billed to hold on the 8th and 9th of July. The show is touted to be the biggest of the band’s London shows ever. The London shows were initially planned to hold in 2021 alongside Duran Duran but were put off due to the COVID pandemic.

The supporting acts for the show that were mentioned during the announcement include. October Drift, Fatherson, LIFE, and Daytime TV for the 8th of July event while Johnny Marr, Temples, Tiger Cub, Petrol Girls, James &The Cold Gun, PEAKS! as well as Connor Selby will be supporting the 9th of July show.