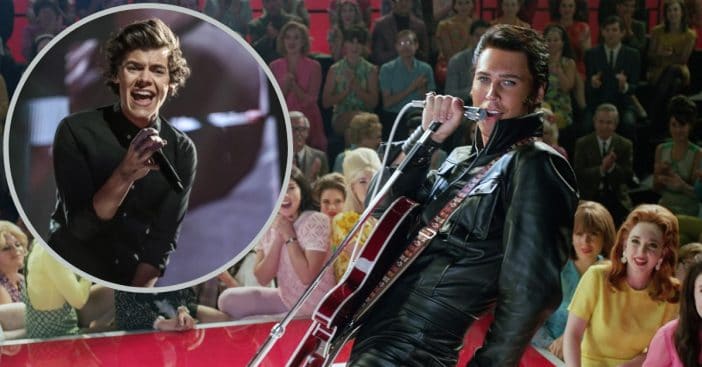 Elvis, the latest movie based on the story of the King of Rock and Roll, Elvis Presley, will be showing in cinemas at the end of the month. Family members of Elvis Presley, including Lisa Marie Presley and his ex-wife Priscilla, have showered encomiums on the movie.

The movie was also given a 12-minute standing ovation during its premiere at the Cannes Film Festival. The major actor of the movie is Austin Butler, who plays the character of Elvis Presley. It turns out that Harry Styles, a member of the One Direction band, was also interested in playing the role.

The audition for the role of the King

Director Baz Luhrmann said that during the movie auditions, many names were mentioned to take up the role of the enigmatic Elvis Presley. Some notable names are Miles Teller, Ansel Elgort, Aaron Taylor-Johnson, and the great Harry Styles of One Direction.

RELATED: Mick Jagger Says That Harry Styles Is Like The Younger Version Of Him

The singer was highly hopeful of snagging the role. The director claimed that the latter’s eagerness to fill the role became his undoing. He stated, “Harry and I came to a place – genuinely – I mean, he was just desperate to put the suit on and explore. He’s such a great spirit, and I have nothing but great things to say about Harry Styles. Harry is a really talented actor. I would work on something with him [but] the real issue with harry is: he’s Harry Styles. He’s already an icon.”

The director spoke wonderfully of the main actor, Austin Butler. He said, “The thing about Austin was that – he will tell you himself – I didn’t pick him. It’s as if he was drawn…. The role drew him in because he was almost born to play it.” Baz spoke on the coincidences in the life of Elvis and Butler. Austin’s mother died when he was the same age as when Elvis Presley also lost his mother.

Butler only forwarded his video audition to the director, and that was how he became the star of the movie Elvis; for two years of the shooting and production, he practically lived his life just like Elvis. However, according to Luhrmann, Austin is currently trying to come back to his persona since the production has ended.

“He’s now going through a sort of, it’s like, deprogramming thing because he’s been a long time since he’s known who he was,” the director said

For Butler, the whole affair was worth all the stress and energy expended because Lisa Marie, Elvis’s daughter, while speaking about the movie, thanked Butler, especially for his part in the movie. “Austin Butler channeled and embodied my father’s heart and soul beautifully. In my humble opinion, his performance is unprecedented and FINALLY done accurately and respectfully. If he doesn’t get an Oscar for this, I will eat my own foot, haha.”

Even though he wasn’t given the role of the King in the movie, Harry has kept himself busy on the set of other movies. He has two movies that will be airing later this year. One is My Policeman, which is centered on a police officer who falls in love with another woman while still in his marriage. Also, he is partaking in the movie Don’t Worry Darling which Olivia Wilde is directing.

Click for next Article
Previous article: ‘Jeopardy!’ Champ, Ryan Long On His Last Match: “I Didn’t Throw The Game”
Next Post: Ray Liotta’s Daughter Speaks Out After His Sudden Death