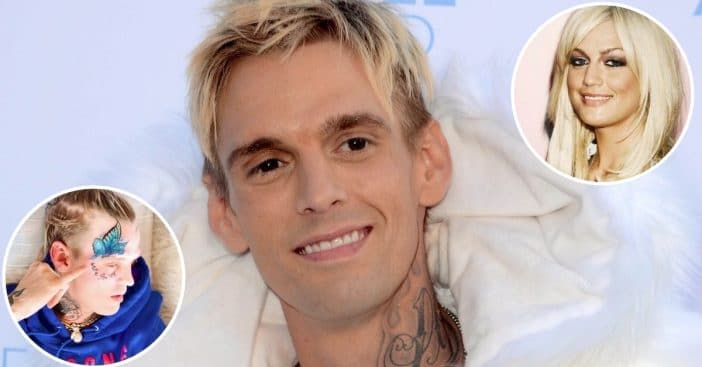 ’90s star Aaron Carter recently got a huge butterfly tattoo on his face to honor his late sister, Leslie, who died at age 25 back in 2012 from a drug overdose. “Life is such a valuable learning lesson, IF you always it to be that. With that being said, this is my body and this tattoo by @tattoo_mike_13 is to commemorate the passing of of my sister Leslie Barbara Carter,” he writes in the caption of his Instagram post.

He continues his heartfelt post, saying, “I always wanted to make her proud. Leslie I know your in paradise. I do feel you inside. The things you taught me and your favorite color being blue you were a Gemini and you were fearless.”

Alongside his butterfly tattoo tribute, he also got the word “Freedom” on his forehead, “Karma” above his left eye, and his son Prince’s name under his right eye.

In a separate post, he talks more about the tattoo and why he got that specific artwork done. “Every time I see a blue butterfly, [it reminds me of her]. She loved blue, it was her favorite color,” he explains. “She had the most beautiful icy blue eyes in the world.”

He also recalls how his late sister was better at singing than both him and his brother, Nick Carter, who is known for being a member of The Backstreet Boys. “She could kick me and Nick’s a— as a singer, like so bad,” he says. “She could sing as good as Kelly Clarkson, Christina Aguilera. She just didn’t get through and had some struggles, you know?”

Leslie was sadly found unresponsive in her father’s home in Mayville, New York, on Jan. 31, 2012. She was taken to the hospital where she was pronounced dead on arrival. She had suffered an overdose of prescription medications Olanzapine, Cyclobenzaprine (muscle relaxer), and Alprazolam (Xanax). Just days before the tragic news, Carter himself had offered to pay for her drug abuse treatment.

“I wasn’t really making that much money. Fortunately, I had just hit my bonus. I got $10,000 the week before Leslie died, and I actually had reached out to her two weeks before that and said, ‘I’m going to get you the money to go to rehab,'” he had previously said to Oprah Winfrey. “She wanted it.”

Click for next Article
Previous article: ‘The Jeffersons’ Cast Then And Now 2022
Next Post: The 2022 Oscars Paid Tribute To Betty White, Ivan Reitman, And Sidney Poitier