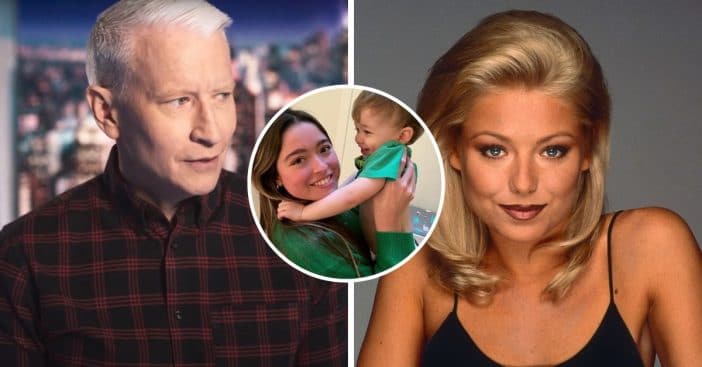 Anderson Cooper recently appeared on Live with Kelly and Ryan and shared an adorable story about his son and Kelly Ripa’s daughter! Kelly and her 20-year-old daughter Lola were recently able to meet his newborn, Sebastian Luke. While they were visiting, Anderson’s oldest son, 22-month-old Wyatt fell in love with Lola!

He joked, “My son Wyatt is so deeply in love with Lola Consuelos that it’s like, the love that burns of 1,000 suns. Look at how he’s staring at her. He even coordinated outfits with her. He is just so besotted. He could not take his eyes off Lola.” He also shared photos of Wyatt and Lola and they were adorable!

Kelly said that it was a “mutual love” and shared that Wyatt was getting jealous because they were there to see his newborn brother. Kelly added, “He grabbed Lola’s hand because she came into see the baby. He was done with the fawning over the baby so he grabbed Lola’s hand. And I said, ‘Wyatt, where are you going?’ And he said, ‘Bye!'”

Anderson’s second son was born earlier this month via surrogate. He revealed, “This is Sebastian Luke Maisani-Cooper. He was 6.8 lbs. at birth and he was healthy and happy and even his occasional hiccups, are to me, adorable. He mostly just sleeps and eats and certainly poops, but he already seems like a wise and thoughtful little chap.”

While Anderson and Benjamin Maisani have split, Anderson said that will continue to co-parent both Sebastian and Wyatt. He added that they remain best friends even though they are no longer partners.