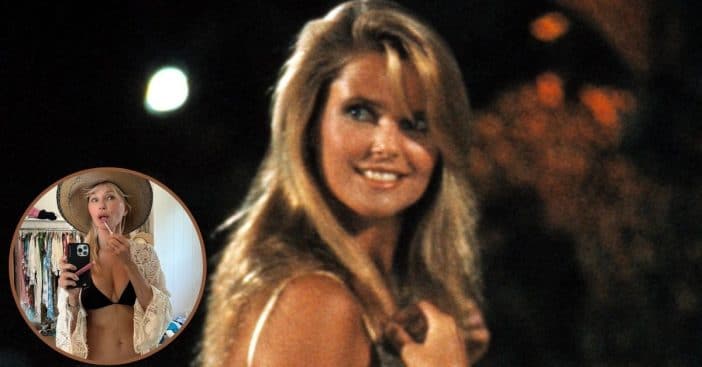 Christie Brinkley recently shared a mirror selfie of herself sporting a gorgeous black string bikini and at 67 years old, she looks incredible in it. “Hat✔️Sunblock✔️SBLA Lip Plump and Sculpt✔️Gratitude ✔️,” she captions the photo, also sporting a straw hat and beach coverup.

Brinkley and her family are widely known to escape to more warm, tropical areas during the wintry months, typically to their beachfront residence in Turks & Caicos. She also owns a home in the Hamptons.

Since arriving at her beach house to soak up the sun, she’s been sharing photos to Instagram to show that she’s still staying active while in paradise. “Sunset bike and stroll,” she writes alongside a photo of her with a blue bike on the beach. “PS if you don’t ride the bike it will rust. Same thing with your body! You’ve got to move it! Move it!”

Why she shares these photos to social media

Last year, Brinkley opened up about sharing those stunning swimsuit photos to social media and why she does it. “I post these pictures because I hear from women my age all the time that say, ‘Thank you for changing the way people think about the numbers,’” Brinkley explains. “Back in the day, numbers represented something. I remember people thinking that after 30, you should never wear your hair past your shoulders or your hemline needed to hover your kneecaps.”

“I’ve always found those rules so limiting,” she continues. “Everybody’s different, everybody’s unique. But it’s like telling a gymnast she can’t do flips past a certain age. It doesn’t make sense. If you’ve got great legs, show them. If there’s something about yourself that you really love, celebrate that. Don’t be controlled by those numbers.”

Brinkley is best known for her Swimsuit Illustrated covers, one in 1979, 1980, and 1981. At 63 years old, she appeared a fourth time with her daughters, Alexa Ray Joel and Sailor Brinkley-Cook. When asked if she would ever pose for SI again, she said she doubts it. “I feel like, been there, done that,” she said. “I think when I put on my bathing suit again, I want to also have a snorkel and go diving, see the fish.”