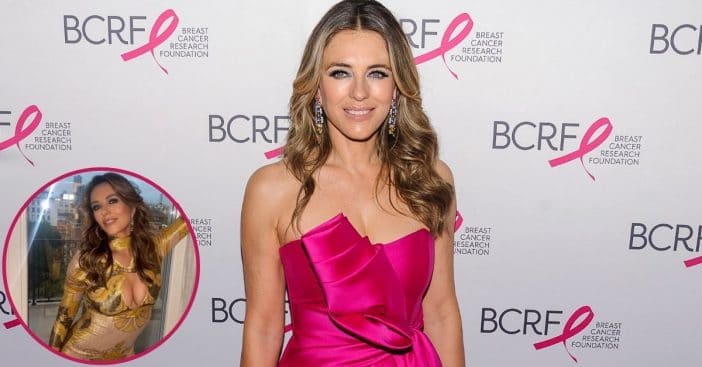 56-year-old Elizabeth Hurley posted tons of new snaps and a complimentary video of herself in a gorgeous form-fitting dress made by Fendi for the Versace by Fendi line as part of the collection. The dress is gold with black accents, hugging her body and exposing her upper half. In one of the photos, she’s posing with her son who is also a model, Damian.

“On our way to the fabulous #fendaceshow,” she captions the post. The post was met with tons of fire emojis and positive feedback.

“The safety pin QUEEN is back!! It was great to catch up,” comments Donatella Versace. Her son, Damian, commented on it as well, simply saying, “Mama.” So sweet! Many other people commented saying she looks like a “goddess,” and another noted that she was “Looking beautiful as always.” She posted a second photo post as well, captioning the set of photos,  “What an evening. A joy to be in Milan for a magical night with @versace @fendi . So many old friends and lots of new ones. I had a blast.”

Since she made her red carpet debut in 1994, Hurley has been a fashion icon. Back then, she took the red carpet with then-boyfriend Hugh Grant, sporting a famous black Versace safety-pin dress to the U.K. premiere of Grant’s movie Four Weddings and a Funeral. Back in 2015, she talked to Buzzfeed about certain fashion trends she’s quick to forget. She says at the time, “Ooooh, gosh, there’s so many. I think in the ’80s we used to wear our bikini bottoms right up here. Pulling them right up on your hip bones. Now if you do that in front of the mirror you’re just astonished at how you used to look, so, it would have to be that.”

In that same interview, she actually reminded fans that she never actually owned that famous Versace dress. “I only had it for one night and it went away… I know that Lady Gaga wore the very same dress last year on the dress’s 20th anniversary. Who knew dresses had anniversaries? That’s what I read in the paper, anyway. It’s been in exhibitions around the world, but no, I never laid eyes on it again.”

Click for next Article
Previous article: Kelly Ripa Celebrates Lola Consuelos For National Daughters Day With Throwback Photos
Next Post: A Dramatic Twist On ‘The Fresh Prince Of Bel-Air’ Reboot Officially Has Its Cast