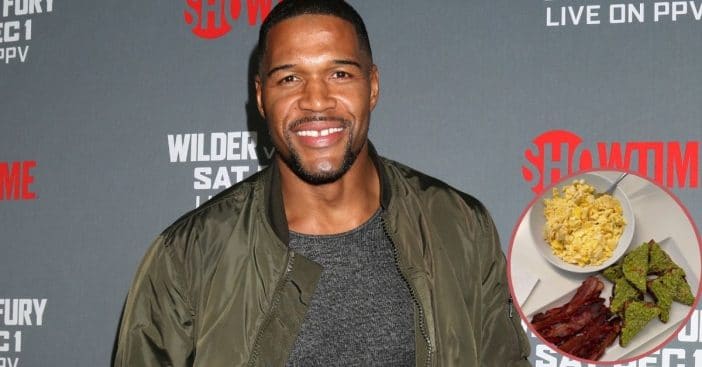 Michael Strahan of Good Morning America has shared a glimpse into his Labor Day weekend celebrations including his twin daughters! He enjoyed a special breakfast with his daughters Isabella and Sophia, showing how much he loves to be a family man and father before all.

Strahan shared his delicious-looking breakfast with the world – a special avocado toast recipe – that he apparently was not allowed to share! Also included in the breakfast was eggs and bacon; an essential holiday breakfast, for sure!

Michael Strahan’s twin daughters know how to serve up deliciousness!

“Happy #LaborDay! Scrambled eggs, bacon and @sophialstrahan’s special avocado toast! Can’t share the recipe! Sorry!” Strahan captioned the post. Fans were quick to comment on his post.  “Happy Labor Day Michael enjoy your great breakfast your daughter made for you looks amazing,” one fan writes. Another says, “Looks great, we need that recipe!” They might need to rain-check on that one!

Strahan has often been seen making TikTok videos with his twin daughters. He shares the twins with ex-wife Jean Strahan and also has two older children, Michael Jr. and Tanita, with ex-wife Wanda Hutchins. Strahan has been going through an exciting transition period as he announced the news of his jersey retirement. He previously played for The New York Giants and his No.92 jersey will officially be retiring on November 28th.

A big transitional period for Strahan coming up

It was actually on a recent segment of GMA that one of his former teammates actually came out onto set dressed in Strahan’s jersey! “That is the ultimate respect from your team. You did so much in that number – not just on the field but in the community – that we want to honour you by making sure that the number is significant and attached to you and what you have done in New York,” Strahan explained on why that meant so much to him.

“I am really stunned. I had no idea what was going on, so I am a little stunned. But I am thankful to have guys like this who have always been there for me.” He adds, joking, “I know their skin is burning wearing that number 92, but enjoy it, it looks good on you!”