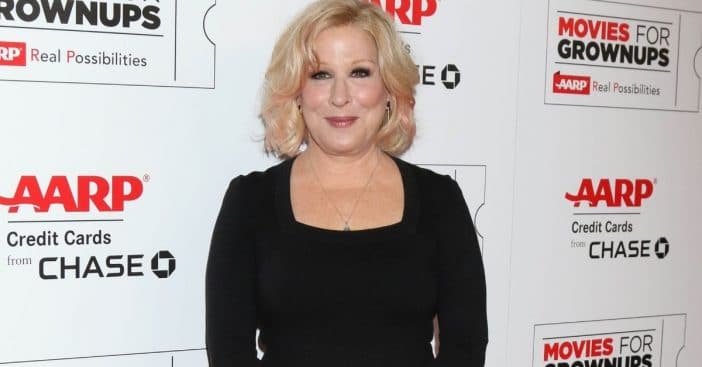 Bette Midler has a new proposition for women after the new abortion law in Texas was passed through SCOTUS. The new law has stated that no woman who is 6 weeks pregnant or more can legally get an abortion in the state of Texas. Well, Midler is proposing that women refuse to have sex with men as a result.

In a new tweet, she writes, “I suggest that all women refuse to have sex with men until they are guaranteed the right to choose by Congress.” The new law also states no exceptions for cases of rape or incest.

I suggest that all women refuse to have sex with men until they are guaranteed the right to choose by Congress.

The law officially went into effect in the beginning of September 2021 after Gov. Greg Abbott signed the law, which is known as SB 8. This actually happened back in May, and as a result, caused abortion clinics in the state to call on SCOTUS to block the law before it went into effect. The clinics argued that the law would prohibit care for “at least 85% of Texas abortion patients” and cause forced shutdowns, according to Insider.

Not only have many celebrities like Midler been outspoken against the new law, but so have popular companies and businesses. GoDaddy, a website-hosting platform, announced that it completely shut down a website that allowed people to rat out Texan citizens getting an abortion. Additionally, ride-sharing apps Uber and Lyft both announced that they would cover 100% of legal fees of drivers sued under the new law – this is because the new Texas law states that ride-sharing drivers who transport women to their abortion after 6 weeks can be sued by the state.

Other celebrities and fans speak out

As a result of Midler’s tweet, a lot of people echoed her sentiment. Nancy Sinatra replied back, “My dad actually suggested that decades ago.” Another fan writes, “I’m at a loss how anti-vaxxers can say “my body my choice” yet a child/woman in Texas can be scorn by a rapist, get pregnant and cannot say “my body my choice” because they said so then that person will have to live with someone else’s choice and suffer PTSD in the long run.”

Of course, there were some people who were against Midler’s tweet, and in favor of the Texas law. “That’s rich Bette you are calling for something that would actually eliminate the need for abortion and is very pro-life position. Do you see the irony of it?” Someone responds. Another agrees, writing, “If all women who would abort their babies refused to have sex if they weren’t willing to take the responsibility of a baby… That’s literally how it’s supposed to work.”