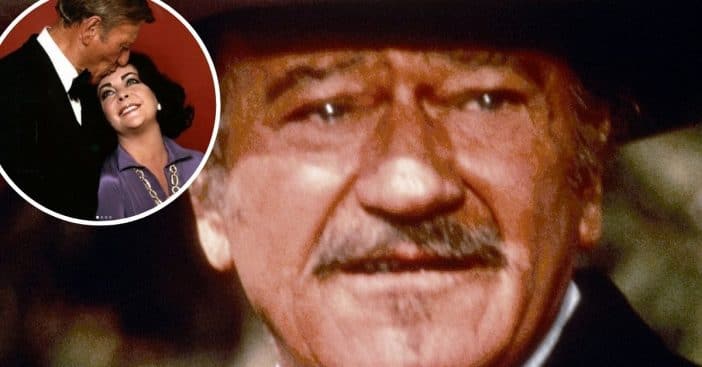 John Wayne‘s estate often shares interesting artifacts from his past. John was a Western hero that was so wholesome and American that he truly cannot be replaced. Turns out even the iconic Elizabeth Taylor thought so too.

In 1979, John was awarded the Congressional Gold Medal by former president Jimmy Carter. Elizabeth was there to give a statement. She said, “He is emblematically American, and he has made that image good. He is a hero, and there are so few left. He has given much to America and he has given to the whole world what an American is supposed to be like – fighting the wild West or settling the wild West, being tough as an old nut or soft as a yellow ribbon.”

See the telegram sent to John Wayne from Elizabeth Taylor

Scroll through the photos to see the telegram…

John Wayne’s estate shared a photo of the medal on Instagram alongside Elizabeth’s telegram. She also sent him a personal telegram that read, “Dear Big John. I was so proud to testify on your behalf for the gold medal. It was a very easy thing to do because you sure deserve it.”

The two were friends for many years even though they never really worked together. Sadly, John died less than a month after receiving the award and Elizabeth’s telegram. He had stomach cancer.

Click for next Article
Previous article: Priscilla Presley Admitted She Never Let Elvis Be Alone, Even At The Dentist
Next Post: Whatever Happened To Tom Wopat From ‘Dukes Of Hazzard’?