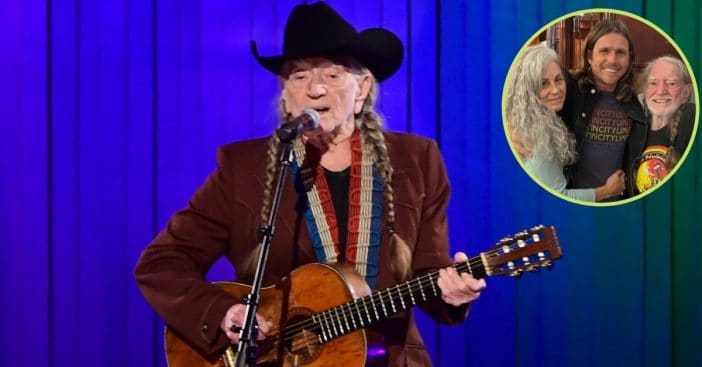 Willie Nelson recently posted a sweet family photo on Twitter where he embraced his wife Annie and son Lukas. The photo was from the first stop of his tour in Madison, WI. And, yes, this means fans who attended the show were able to see the father-son duo perform together!

It’s also worth noting that seeing Willie Nelson & Family is a rare and great opportunity. With all of their other projects going on, tour dates often clash with one another, meaning that this may be a once-in-a-lifetime opportunity to see them together.

This family photo describes their relationship so well

Back out on the road with Dad! First show out in Madison, WI last night! @WillieNelson pic.twitter.com/ndvb5FYsWg

According to Outsider.com, after the show in Madison, they went down to Bonner Springs, KS to play with ZZ Top that Sunday night. The father-son duo is teaming up again on August 10th to play with the Avett brothers. It sounds like Willie Nelson & Family are staying busy as ever as summer begins to come to a close!

RELATED: Willie Nelson Is ‘On The Road Again’ With A New Tour This Summer With 14 Stops

August will be jam-packed with shows featuring Willie Nelson & Family. Particularly on August 21st, it’s slated to be quite a show as Chris Stapleton’s All-American Roadshow will feature them in addition to other popular country artists. Additionally, Willie will be playing the Outlaw Music Festival with Sturgill Simpson and Margo Price and his son will be taking off on their own tour soon and playing across the country throughout the fall. Exciting stuff is in the works for the family!