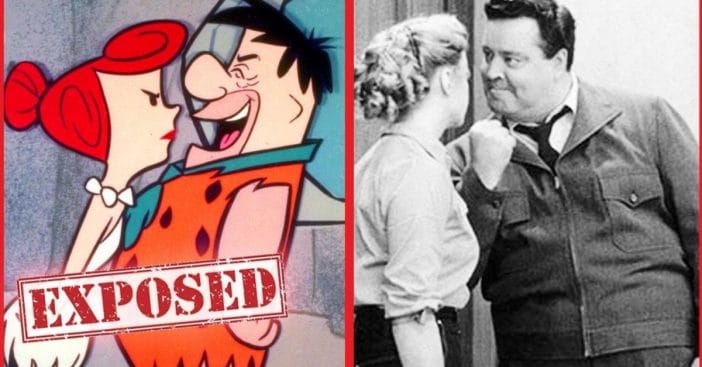 Everyone has heard of The Flintstones. Fred and Wilma, Dino, pushing your car with your feet, selling cigarettes to kids? The show was fantastic. It was the first animated series to have a primetime slot on tv and was the longest-running cartoon till it was passed by The Simpsons. As such The Flintstones is considered a cultural icon. But did you know the show has been accused of liberally borrowing from another, even older iconic TV show?

When compared side by side, many people claim that The Flintstones is basically a prehistoric version of Jackie Gleason’s wildly influential sitcom, The Honeymooners. But let’s look at the evidence ourselves.

Let’s start with how Fred Flintstone is basically Ralph Kramden of The Honeymooners transported thousands of years into the past. Kramden is a loudmouth, short-tempered man who frequently resorts to yelling, insults, and empty threats to get his way. Underneath this gruff exterior, however, he is a loving husband and devoted friend. He is unsatisfied with his working-class job and often comes up with outrageous schemes to make a quick buck.

Now take Fred Flintstone, who is a loudmouth, short-tempered man who frequently resorts to yelling, insults, and empty threats to get his way. Underneath this gruff exterior, however, he is a loving husband and devoted friend. Unsatisfied with a working-class job? Check. Outrageous moneymaking schemes? Check. See what I mean?

Both characters enjoy bowling and are members of silly men’s only social clubs. Just about the only difference is in their catchphrases. Fred’s “yabba-dabba-doo” has aged slightly better than Ralph’s “pow! Right in the kissa.”

Not only are both show’s main characters basically carbon copies, so are their best friends and sidekicks. Both Ed Norton and Barney Rubble are considerably more even-keeled than Ralph and Fred, respectively, and when they do get into arguments it’s usually because of their friend’s short temper.

Norton and Rubble are also both loyal almost to a fault, putting up with insults and bluster from their best friends regularly. They both have a wife who is way too attractive for them and are easy going and easy to like. Basically the perfect foil for their louder, brasher friends.

Voice actor Mel Blanc of Bugs Bunny fame was even asked to copy Norton’s vocal patterns for Barney’s character, a request that he flat out refused. Despite that, these two shows are starting to sound more and more similar.

Well, maybe this is just a coincidence so far. Having two friends with opposite temperaments is quite common on TV. But then you notice how the main characters look. Ralph Kramden is a large man, both tall and heavyset, with short, dark hair who looks like John Goodman would inevitably be cast to play him in the movie version of The Honeymooners.

Similarly, Fred Flintstone is a tall, overweight man with short dark hair who was actually played by John Goodman in the movie version of The Flintstones. And both Ed Norton and Barney Rubble are smaller than their friends, with Norton being considerably thinner than Kramden and Barney being a good head and half shorter than Fred. This is starting to sound more and more suspicious.

Alice Kramden is the sensible, level-headed wife of Ralph who has to bear the brunt of his tantrums and outbursts. She can foresee the failures of her husband’s get-rich-quick schemes, but he never listens to her advice. Wilma Flintstone is the practical and realistic wife of Fred who has to put up with his poor behavior and flashes of anger. Sounds pretty similar, doesn’t it?

Then there’s Trixie Norton, Ed’s wife, whose character is underdeveloped except for the repeated joke of her having once been a burlesque dancer. She is also much more attractive than her husband, just as Betty Rubble is way out of Barney’s league. Betty also isn’t given much to do other than take up space looking great.

Just about the only difference between the two sets of wives is that Wilma and Betty love to shop and run up credit card bills, but we’ll delve into that a bit later.

One of the biggest annoyances of Ralph Kramden was his mother-in-law. She is even sharper tongued than him, and hates Ralph for, as she sees it, not being able to adequately provide for her daughter.

Contrast that to Fred Flintstone, who has a very loving relationship with his mother-in-law. Wait, scratch that. Pearl Slaghoople, the impeccably named mother of Wilma, disapproves of Fred completely, from the time she first met him as a penniless bellhop masquerading as a millionaire to the present day in Bedrock. Both mothers-in-law are impossible to please and prove to be a constant irritant to both Ralph and Fred.

It’s hard to believe today, but social clubs with preposterous names like The Loyal Order of the Moose and The Benevolent and Protective Order of the Elk were once very popular. I can only assume people loved to sit around and argue about which horned animal was best back in the day. The Honeymooners dutifully skewered this by having Ralph belong to the Loyal Order of Raccoons— a much less dignified and proud animal. And by now I’m sure you can tell where this is going.

On The Flintstones, Fred and Barney regularly attend meetings of the Loyal Order of Water Buffaloes, an exclusive men’s only club helmed by a man with the ridiculous title of the Grand Poohbah.

But wait, you say, this might all still be a coincidence. You can’t just copyright a show about two couples who are friends. And if the characters are a little derivative, isn’t all art? But wait, just you wait.

Because not only did Hanna and Barbera borrow the premise of their show, they even tried to lift some of the talents behind Jackie Gleason’s hit. Two of the first writers hired to work on The Flintstones were Herbert Finn and Sydney Zelinka, who had made their names writing for The Honeymooners. Which seems about as blatant as you can get.

And while it didn’t work out— both writers were soon fired for being too wordy and not including enough of the sight gags that were perfect for animation— that doesn’t change the fact that The Flintstones literally tried to employ the same writers that made The Honeymooners so great.

And this is where things get fun. At first glance it looks like The Flintstones also completely copied the social class, however, let’s dig a little deeper. Ralph Kramden is a bus driver, and Ed Norton works in the sewer department, as he puts it as a “Sub-supervisor in the sub-division of the department of subterranean sanitation, I just keep things moving along.” And both couples live in relatively small apartments in New York, constantly scrambling for money.

In other words, The Honeymooners is quite clearly a blue-collar show. And at first, it appears that The Flintstones is too.

Both Fred and Barney work in a quarry and Fred is constantly grumbling about money. But then you notice that Fred and Barney own their own houses. And their own cars. And the best the stone age has to offer when it comes to comfort items. Dishwashers, hairdryers, etc. Additionally, Wilma and Betty are constantly shopping. So we must admit, the Flintstones aren’t working class, they’re firmly in the middle of the pack. In fact, they’re living out the early ’60s suburban American dream.

So, what do you think? Did The Flintstones borrow a little too liberally from The Honeymooners? Have you noticed these similarities before? How many did we miss? Let us know in the comments!