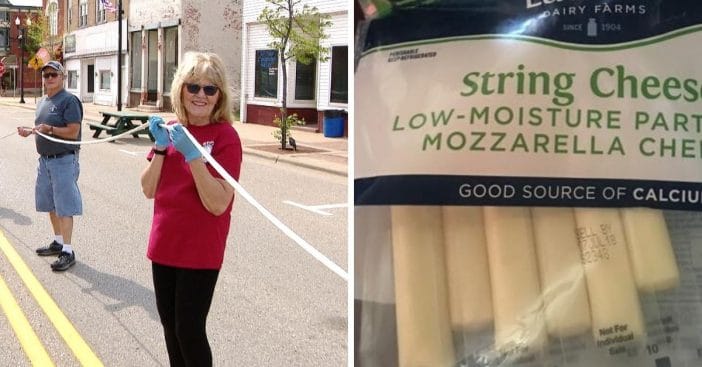 Gerard Knaus’ 85-year-old father, Jim, had set the original record in 1995 and the Knauses beat their 1995 record in 2006 with a piece of the cheese that was nearly 2,000 feet long. Looks like they have yet another new record to celebrate!

That is one looooooooooooong piece of string cheese. @BenKrumholzWLUK reports on an effort to break a world record — Wisconsin-style — in Weyauwega: https://t.co/2jmUpMsOx2 pic.twitter.com/OY8wXjagu5

“We’re just adding onto his record,” Gerard told WLUK-TV. “That’s all we’re doing.” In order to achieve this record, they had to obtain the help of more than 1,700 Weyauwega residents. They all stood seven feet apart on a shut-down Main Street, grabbing a piece of the string cheese as it stretched down, uncoiled from a trailer pulled by a tractor.

RELATED: You Won’t Be Able To Buy This Popular Cheese From Costco Anymore Due To BLM Controversy

“I’ve never seen this before and I want my piece of string cheese,” said resident Allen Robbert. The actual photo of the town’s residents standing in formation with the cheese is definitely a sight to behold!

Ok but can you say that your state created the worlds longest string cheese? #wisconsin pic.twitter.com/jF59qb6ZYz

After 90 minutes and a 3/4-m-long piece of string cheese later, it’s presumed that the record cheese likely equaled 30,000 individual sticks of cheese. What’s even better? The residents who participated got to keep their cheese! Gerard notes that Guinness World Records recognized the 2006 record, so he hopes they recognize this one, too!

Click for next Article
Previous article: Jinger Duggar And Husband Share Their Thoughts On Family’s Show ‘Counting On’ Cancellation
Next Post: Rumer Willis Responds To Fans Telling Her She’s ‘Too Thin’