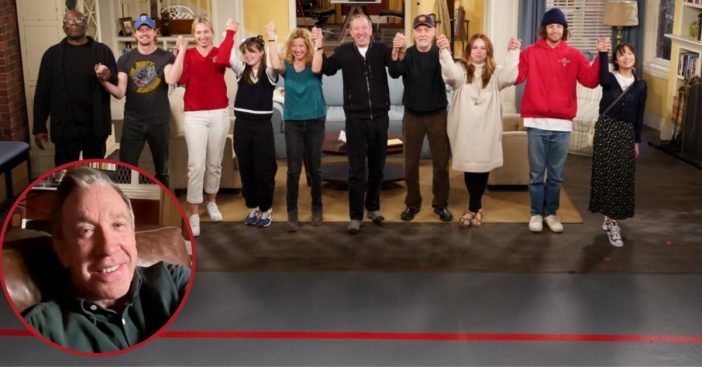 Last Man Standing has officially come to a close and Tim Allen documented the emotional final moments online as they wrapped up filming. Beginning on March 22nd, Allen took to Twitter to express his gratitude for fans that have been around, supporting the show for 8 long seasons, about to be 9. “Table read tomorrow for our last show of nine grateful seasons. Thanks to all who watch our work,” he writes alongside a photo from the set.

March 23rd included a trip down memory lane, showing a photo of his ‘Baxter’ den. A bunch more photos came coming until the mood really changed on March 29th, marking the final days of shooting. “So many emotions as we shoot this next to last day. Whew. Thanks to so many people most of all, all you who watched our work. Thank you.”

So any emotions as we shoot this next to last day. Whew. Thanks to so many people most of all all you who watched our work. Thank you. pic.twitter.com/2AS4GxCe30

March 30th came, and Allen began posting much more emotional photos and captions. “Halfway thru this emotional last episode waiting for my last scene in the office,” he captions one photo, noting that the final episode is definitely going to be a tearjerker for all of us.

Halfway thru this emotional last episode waiting for my last scene in the office. pic.twitter.com/aijg6tjO5n

Then, to wrap things up and really nail it into reality, he shared a simple photo of the Baxter’s front door. “Finished…so so sad and yet piles of gratitude,” he writes. Cue the tears.

Twitter users began pouring in their love and support online after Allen finished posting photos. “Will miss this show! Loved it as much as I loved Home Improvement. Can’t wait to see future projects,” one user writes. Another says, “As someone who grew up watching ‘Home Improvement’ with her parents and now watching ‘Last Man Standing’ with my own family, thank you for the memories and all the laughs. My favorite version of family time!”

A last fan adds, “This is the very definition of bitter/sweet. I’m sad it has come to an end, however I’m most appreciative you brought us along allowed us to experience a small part. I’m also happy that you, the cast, and production crew could put it to bed the right way. Thanks!”

Click for next Article
Previous article: 95-Year-Old Dick Van Dyke Passes Out Cash To Strangers
Next Post: Katherine Schwarzenegger Explains Why She Won’t Post Photos Of Her Daughter’s Face