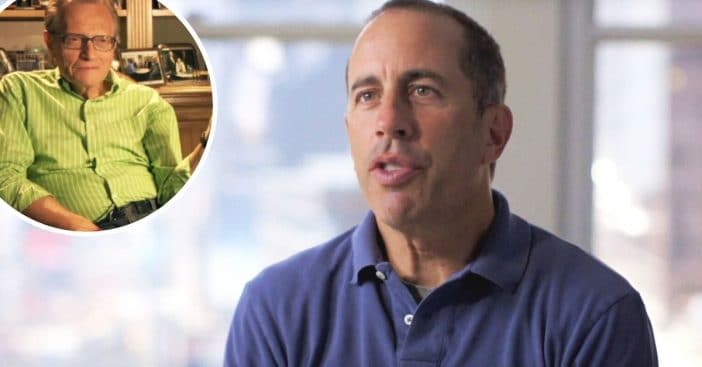 87-year-old Larry King died last weekend. Larry had a broadcasting career for over six decades and hosted Larry King Live for 25 years. After news of his passing, many fans found some of his most iconic interviews. One interview, in particular, kept coming up. It was a 2007 interview with comedian and actor Jerry Seinfeld. Some fans were upset with how Jerry talked to Larry during the interview.

However, Jerry took to social media to explain and express his sadness after learning of Larry’s death. He said that it was all just joking during the interview and Larry knew that. The interview in question detailed Larry asking Jerry if he gave up Seinfeld. Jerry chose to end Seinfeld before it got canceled to “end it on a high note.”

Larry asked, “You gave it up, right? You canceled them, they didn’t cancel you.” Jerry responded, “You’re not aware of this? You think I got canceled? Are you under the impression I got canceled? I thought it was pretty well-documented. Is this still CNN? [When] I went off the air I was the number-one show on television, Larry. Do you know who I am?”

Larry joked back, “Jewish guy. Brooklyn.” Jerry said, “The ‘canceled’ bit was just me having fun with his little mistake. Nothing more. Or less.”

In conclusion, watch the full interview below: