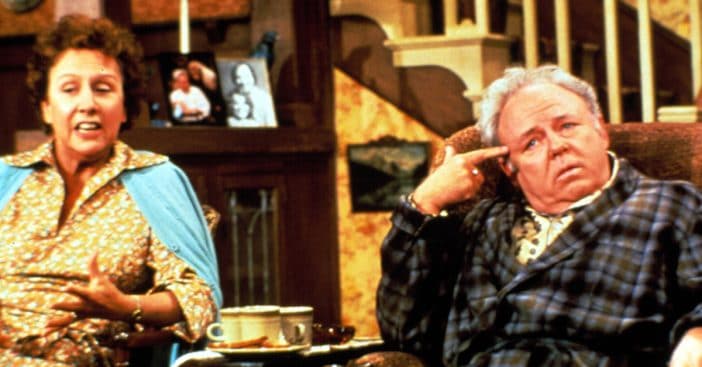 Carroll O’Connor. Archie Bunker. As far as the television audience is concerned, they’re one and the same — at least visually, though obviously not in character. But what audiences have likely forgotten in their enjoyment of All in the Family over these past 50 years is the fact that Carroll had a life and career pretty far-removed from the Bunkers’ Queens, New York living room.

“I had no ambition to be an actor,” he admitted in 1972. “I wanted to have a permanent job as a professor of European history at some university. I thought on the side I’d write a historical novel or two.” And that decision came after he had been rejected by the United States Navy for service in World War II, which led to him joining the U.S. Merchant Marines during that time. “After that,” he said, “I visited some friends in Montana. I decided I’d better get my education like all good middle-class American boys do. I enrolled in the University of Montana.”

RELATED: ‘All in the Family’ Was Based on ‘Till Death Us Do Part’ — Meet the Original Bunkers

Which turned out to be one of the most significant moves he’d ever made. Born on August 2, 1924 in New York City, at the University of Montana he worked as editor of the student newspaper, The Montana Kalmin;  met his future wife, Nancy Fields, and began performing on stage as part of the school’s acting troupe, The Masquers. The latter fairly quickly got him noticed.

On February 6, 1949, the Great Falls Tribune reported that the school was mounting Maxwell Anderson’s Winterset, with the piece observing, “The Masquers have quite an ace in the hole in the person of Carroll O’Connor. The former New Yorker has blossomed out from a minor role in Life with Father to an accomplished character actor with a score of dialects and stage mannerisms. He plays Trock, a gangster.”

Later that year, The Missoulian heralded the fact that The Masquers would be putting on the play Our Town, adding, “Our Town’s editor, Webb, is Carroll O’Connor. Helen Hayes is cast as Mrs. Webb.” The students watching that particular duo do their thing may have been impressed, but could not have imagined the stardom awaiting both performers.

Carroll had to leave school early and go to Ireland to lend a helping hand so that his younger brother, Hugh, could get into medical school. There he enrolled at the University College Dublin, where he studied English literature and Irish history. During his time in Ireland, Nancy Fields graduated from the University of Montana and sailed there to meet him, the two of them getting married. Flash forward to 1955 and the couple returned to America and the University of Montana, where he earned a master’s degree in speech.

The Missoulian on December 4 of that year reported on the fact that it was obvious Carroll was taking his Irish heritage seriously, as both he and Nancy delivered a talk on “The Irish of It All” for the Missoula Woman’s Club. While noting that he was a graduate assistant in speech at MSU, they covered his starring performance in a production of Othello. “As Othello,” they wrote, “he gives a powerful and inspired interpretation to his difficult role. In appearance as well as sensitiveness to the part, O’Connor develops ably the character of a military leader accustomed to handling men, but ignorant of the ways of women.”

By the spring of 1956, he proved himself in another way: playwright, along with the announcement that his original script A Seraph Intercedes — about the anti-partitionists who fought in Ireland for 40 years — would be staged. On top of that, he was stage director of Carousel and would be writing a play on the historical aspects of Missoula in 1872 for his master’s thesis. Different roles kept coming, as did the chance to continue writing scripts.

On television, he made his debut in two episodes of the anthology series Sunday Showcase, which led him to many guest star appearances throughout the 1960s, including four episodes of The Untouchables, Death Valley Days, Bonanza, The Defenders (where he first worked alongside future All in the Family co-star Jean Stapleton), The Fugitive, Dr. Kildare and Mission: Impossible.

All of this — particularly his performance in What Did You Do in the War, Daddy? — brought him to the attention of Norman Lear, who was adapting the British sitcom Till Death Us Do Part for the American audience and instinctively knew that Carroll would be perfect for the part, despite the fact he had based Archie partially on his own father.

In an interview with The Ithaca Journal, Norman related, “I adored my father. And if he’s listening, he knows how much I miss him. But he was of another generation when prejudices were more pronounced, when people were saddled with bigotry which was passed on from one generation to another. And we used to argue, just as Carroll O’Connor argues on the series each week with Rob Reiner.”

Well, Carroll certainly realized that there was something at the core of Archie Bunker that would potentially allow the character to connect with America, though it’s doubtful he could have pictured the impact it would have on his life and career. Sympathetically, he mused, “You have to remember, Archie is a victim, too. Of his own education and background. His thinking was shaped at an early age when he was inculcated with bigotry. He got it from his parents.”

As to the connection between actor and character, Norman pointed out, “Carroll and I didn’t always agree about the scripts, but let me say that I worshipped the ground he walked on. He was Archie Bunker. When I read him for the role, I can’t tell you what I had in mind for that character. All I can tell you is that Carroll O’Connor, the minute he read those lines, that’s who Archie Bunker was.”