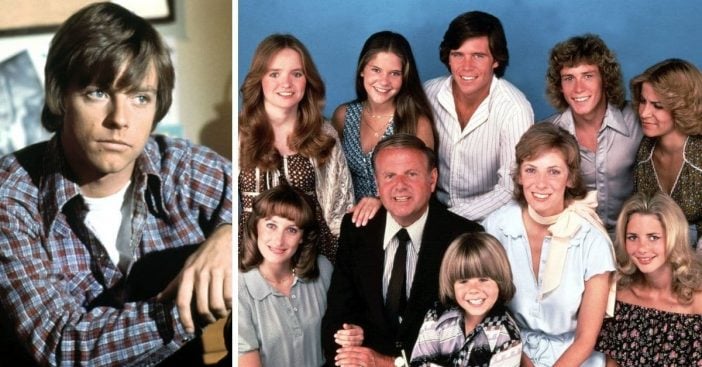 Eight is Enough, the comedy-drama television series that ran on ABC from 1977 to 1981, became appointment television for viewers who had fallen in love with the Bradford family and its cast. One person who, as it turned out, wasn’t quite as enamored with the whole thing was Mark Hamill — perhaps you know him as Luke Skywalker from Star Wars — who had signed a five-year contract to the show but had used the Force (i.e. fate) to get out of it.

By the time he’d been cast as David Bradford, Mark had been making the rounds as a guest star on a number of television shows. He’d also spent a year on the daytime soap opera General Hospital from 1972 to 1973 and was a regular on the comedic The Texas Rangers from 1974 to 1975. After that he started doing TV movies, including Sarah T. — Portrait of a Teenage Alcoholic (1975), and found himself cast by George Lucas in Star Wars before shooting the Eight is Enough pilot. In truth, no one expected Star Wars would become the phenomenon that it became. But then, as he began to consider its potential, combined with his desire to be a star on the big screen rather than the small, Mark began trying to get out of his contract.

A Car Accident Changes Everything For Mark Hamill

Eight is Enough producer Bob Jacks apparently attempted to assure him that television was a much more secure road to take, but Mark kept pushing. Finally, the production company behind the show, Lorimar, made it clear: they would not let him out of his contract. Reluctantly he accepted this, though it’s not clear how he was going to handle the situation with the first Star Wars sequel, The Empire Strikes Back. But then the aforementioned fate entered the picture.

In January 1977, Mark ended up requiring facial reconstruction surgery following an accident in his BMW. As he told Gossip Magazine, “What happened was that I was on the wrong freeway. I was way out in the sticks somewhere and there were no cars and no traffic, thank God. I was speeding, going too fast, and what happened, I think, was that I tried to negotiate an off-ramp and lost control, tumbled over and went off the road. I fractured my nose and my cheek. I just woke up and I was in the hospital and I knew that I had hurt myself very badly, but I wasn’t really sure. And then someone held a mirror up to my face and I just felt that my career was over.”

That wasn’t exactly true, but his contract with Eight is Enough was, with Lorimar releasing him. He was free to shoot Corvette Summer (okay, admittedly not so big a deal as far as the world was concerned) and, then, The Empire Strikes Back. Meanwhile, Grant Goodeve was brought in as Mark’s replacement as David Bradford.

And everyone lived happily ever after. So let’s check back in with our favorite LARGE family :)…

Click for next Article
Previous article: 87-Year-Old Sophia Loren Shares Why She Still Feels Like She Is 20 Years Old Inside
Next Post: Dolly Parton Never Goes Without Makeup In Case Of An Emergency