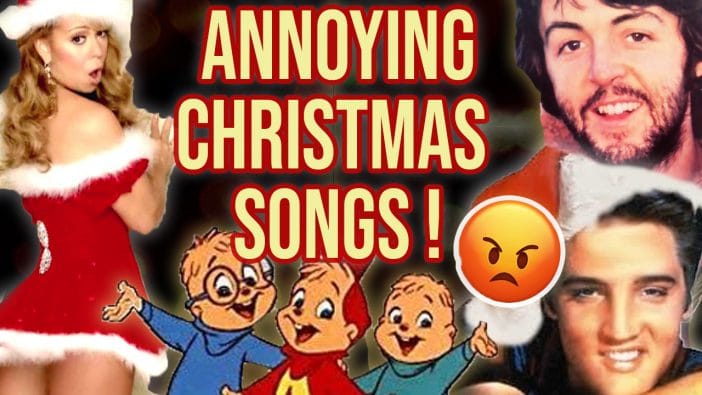 Christmas songs run the gamut from moving religious hymns to nostalgic looks at times gone by. From upbeat dance tunes to cheese-ball novelty songs. Everyone likes different Christmas music, but it’s that last group that is a little more of a gruyere area and causes the most controversy. Some people love a little cheese grated on top of their holiday hits, while others wouldn’t touch the fondue pot of Christmas songs with a ten-foot candy cane. Which is exactly why today is a gouda time to take a look at some of the cheesiest Christmas singles of all time.

Now, let’s set your mind at cheese and get to the songs!

When a musical artist who hasn’t been relevant in almost a decade releases a new album, it’s always an iffy prospect. And when it’s a Christmas album, you know you’re going to be in for some rough songs. This is exactly the case for our first cheesy song, Cyndi Lauper’s “Christmas Conga.” Released in 1998, the song is an “interesting” blend of late-nineties dance-pop and vaguely Christmas-sy lyrics. Singing the immortal lines “happy times with all your friends, come on and hold my hips a little longer,” and, of course, “Bonga, bonga, bonga, do the Christmas Conga,” Lauper attempts to carve herself a niche market in the world of Christmas songs, but instead writes an unlistenable, cheesy trainwreck. Unsurprisingly the record has only sold 26,000 copies – I assume mostly to grandmas who still think it’s 1984 trying to be hip. “Christmas Conga” is cheesy to the extreme, and rams home the point that just because there’s a topic that doesn’t have its own Christmas song yet, doesn’t mean one should be written.

2. “Grandma Got Run Over By A Reindeer”- Dr. Elmo and Patsy Shropshire

If there’s any song that absolutely must be included on this list, it’s “Grandma got Runover by a Reindeer” by Elmo and Patsy Shropshire. No arguments allowed. The song is the big mouth billy bass of holiday tunes – at first, listen it’s amusing, but after repeat experiences, the cheese factor becomes a mountain too big for some of us to climb. This 1979 husband-and-wife holiday song, tells the classic Christmas tale of Grandma getting smashed on eggnog, wandering out into the snow, and getting involved in a hit and run with Santa that really should have resulted in some charges. Christmas isn’t ruined, however, as Grandpa is happily watching football and drinking beer inside. Typical. The song is repeatedly voted into both most loved and most hated Christmas singles of all time, because some people can’t get enough nostalgic cheese during the holidays, and some people are straight-up lactose Christmas intolerant. And for those of you who love “Grandma got Runover by a Reindeer”, there’s now even an animated TV special that really digs into the nuance of the story.

A song written and performed by some of the most popular musical artists of the day, and all the money goes to fighting famine in Ethiopia? Sounds like a great idea! Unfortunately, the whole enterprise gave off the scent of an extremely ripe Roquefort. First, there are the lyrics. Do they know it’s Christmas? Seeing that Ethiopia has been a majority Christian nation for over 1500 years, yeah, I would assume they do know. Then there’s the music itself, which is cheesy and saccharine enough that the band was labeled “Bland Aid.” As Morrissey of The Smiths said, “One can have great concern for the people of Ethiopia, but it’s another thing to inflict daily torture on the people of Great Britain.” Writer Bob Geldof even stated that “I am responsible for [one] of the worst songs in history.” But whatever you think of this celebrity cheeseball of a song, it did raise more than 8 million dollars for famine relief, so at least its cheese was put to good use.

4. “I Want a Hippopotamus for Christmas” – Gayla Peevey

“I Want a Hippopotamus for Christmas” divides people into two clear types. First are the people who after several listens are frantically calling around to their local pet stores, because maybe if they buy the little girl a Hippo she’ll. Finally. Stop. Singing. Then there are the people who secretly love the song, and march around singing it at the top of their voices. Like me. The song, sung by ten-year-old Gayla Peevy, tells the story of a very loud, very confident, and dare I say, slightly bratty girl who demands a Hippo for Christmas. No dinky tinker toys will do. Why does she want a hippo? What’s she going to do with it? These are some of life’s deepest mysteries. Peevy rocketed to stardom after performing the song in 1953 on The Ed Sullivan Show, and this cheesy masterpiece of outlandish childhood Christmas demands forever entered our holiday rotation. I feel like I need to update my Christmas wish list….

Imagine the cheesiest thing you can think of? Flavor explosion goldfish? Think cheesier. Fondue night? Gotta go cheesier. Imagine a whole cheese world, with little cheese boys, and little cheese girls playing quietly by the shore of the majestic cheese ocean. Then you’d be getting close to the cheesiness of Wham!’s “Last Christmas.” Released in 1984, “Last Christmas” is smaltz given musical form. The song is about a man who last year gave away his heart, only to be immediately dumped the next day. He says that next year he won’t make the same mistake, as he will be giving it to “someone special.” Instead of moving on, he seeks her out the next Christmas, and even though the girl no longer even recognizes him, states that “if you kissed me now you’d fool me again.” Ah, unrequited love. To their credit Wham! donated all their proceeds from the song to help combat the famine in Ethiopia, because apparently, it was the law in the 1980s that all cheesy Christmas songs had to.

6. “The Chipmunk Song (Christmas Don’t Be Late) – Alvin and the Chipmunks

At first when Alvin and the Chipmunks begin singing “The Chipmunk Song,” it seems like a perfectly acceptable holiday song. Sure, it’s a bit cheesy, what with the animals singing about what they want for Christmas, but hey, I also don’t want Christmas to be late. This is actually pretty sweet and endearing. But then those high-pitched voices don’t stop, and around minute 1:30 you start feeling like the Nazis at the end of Raiders of the Lost Ark. The ones with their faces melting off. At the end of their ditty, all the chipmunks beg to sing the song again, to which their “manager” says, “don’t overdo it.” Which they already have, but praise cheeses for that. “The Chipmunk Song” was the only Christmas song to reach number one on the Billboard Pop 100 until Mariah Carey’s “All I Want for Christmas” – a fact which boggles the mind. In fact, it’s still the third highest-selling digital holiday single, proving the fact that while cheesy Christmas songs aren’t for everyone, some people can’t get enough holiday kitsch.

Ali lost some fights. Babe Ruth occasionally struck out. And even one of the greatest songwriters in history sometimes wrote cheesy, shallow singles. Thus it is with Paul McCartney’s single “Wonderful Christmastime.” Released in 1979, every instrument on the song was recorded entirely by McCartney by himself, which begs the question, where was Lennon, or even Wings?!?! The single is about how Paul is, uh, simply having the best Christmas ever. No specific reasons are given, so I guess we’re all going to have to trust him. It also features a jarring switch from verse to chorus, almost like two songs smashed together, which makes it seem as if all this festive cheer is a bit forced. There’s nothing much cheesier than a sense of forced joy at Christmas. However, the song still nets the cute Beatle over $400,000 a year in royalties, which adds up to over $15 million to date. No wonder McCartney has let it brie and is having such a wonderful Christmas.

8. “All I Want For Christmas Is You” – Mariah Carey

Chances are, you have heard this song a million times already since October. Yes, October, because so many people start playing Christmas music earlier than socially acceptable. The song was part of Mariah’s fourth studio album and first holiday album, Merry Christmas (1994). Despite it being stupidly overplayed year after year, it’s still a fan favorite. The ’90s Christmas song has topped the charts time and time again at No. 1 during Christmastime. Plenty of musicians have also tried their hand at covers of this tune, but nothing beats the original… at least for most people. I personally think. Michael Bublé’s version is stunning if you haven’t heard it yet.

9. “The Twelve Days of Christmas” – By Literally Anyone

We’ve heard this song redone a million times, but it was actually first composed in the year 1780. There have been so many different kinds of versions of this song, and even though they can be exciting to listen to as the Christmas season inches closer, it becomes a bit repetitive… or extremely repetitive. It also might just be one of the most annoying songs to sing in a round of Christmas carols. However, my first version of this song is actually Bob Rivers’ “Twelve Pains of Christmas.” Perfectly describes how the Christmas season really is for some families!

The song itself isn’t necessarily bad, but there’s just something about Madonna trying to pull off this Betty Boop style accent through the whole song. One YouTube commenter points out that she sounds like she’s trying to be Chuckie from that kid’s show The Rugrats, but I personally think she’s trying to sound like Eartha Kitt with a weird twist. Either way, it just doesn’t work for me, and whenever this song comes on, I usually click ‘next.’

There they are. Some of the cheesiest Christmas songs of all time. Do you love these cheddar-infused holiday hits? Which songs are you feta up with? And which one is gonna be stuck in your head for the rest of the day? Let us know in the comments below, we read every one.