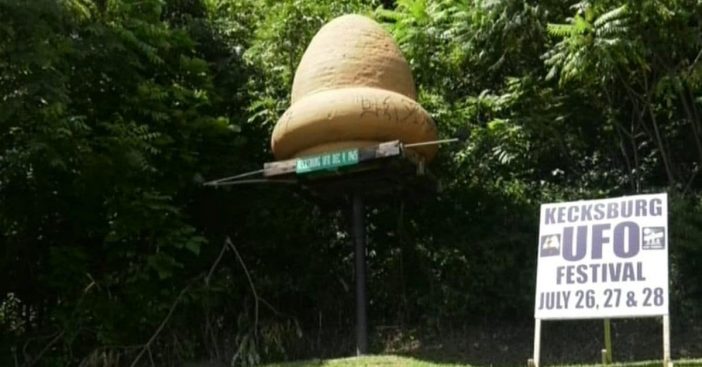 On December 9, 1965, a blue-tinged fireball streaked across the sky over Kecksburg, Pennsylvania. However, residents of Kecksburg were not the only people to report this strange siting. In fact, the UFO was seen by people in six states and even in Windsor, Canada.

Speculations began that the mysterious object was anything from a simple meteor, to a Russian satellite, fragments of a stellar body, or perhaps even an alien lifeform. While some theories are more far-fetched than others, any of them could still potentially be true. The object that fell from the sky that night has never been identified. Astronomers can still only speculate as to what it was and where it came from.

The Kecksburg Incident involved more than just a few sitings of bright lights in the sky. Sonic booms were heard in Pittsburg and pieces of debris started fires in fields in Ohio and Michigan. People as far as Detroit and Canada witnessed the strange object. Kecksburg locals reported whisps of blue smoke and earthly vibrations.

The military showed up immediately to search the area, but even with the help of State troopers, after several days nothing was recovered. As research continued in the ensuing years, several independent articles used different means of tracing the foreign object. They came to the conclusion that the UFO had probably landed somewhere in Lake Erie.

Plenty of conspiracies about a cover-up have emerged over the years. For example, the military allegedly shut down the attempts of a reporter for a local radio station to produce a radio documentary titled Object in the Woods. NASA also released a statement in 2005 saying that metallic fragments in the area confirmed that the object was from a Russian satellite. However, they also claimed that these records were lost in the 90s. Incidents such as these initially made the idea of some form of cover-up very alluring.

Despite the theories, however, even MUFON (the Mutual UFO Network) has concluded that the Kecksburg Incident was not a cover for an extra-terrestrial visit. Information is often lost by NASA, so the previous example isn’t necessarily notable. Today researchers believe that the mysterious object was either an advanced man-made device or a probe that was knocked out of the sky. And while these scenarios seem likely enough, we’ll probably never know for sure what fell over Kecksburg that night.

Click for next Article
Previous article: Why The Pandemic Helped Bring Back Sunday Family Dinners
Next Post: Orlando PD Donates Christmas Gifts To More Than 200 Kids In Need