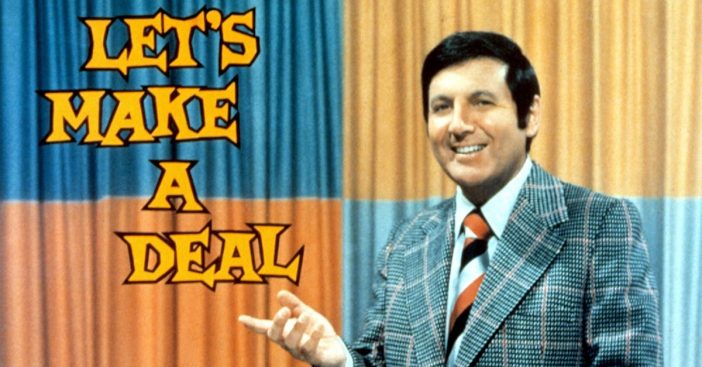 Throughout the 1960s and 1970s, while Monty Hall hosted the TV game show Let’s Make a Deal, he gave away money and prizes every single day to contestants who usually arrived in costume, screaming out, “Pick me, Monty! Pick me!” But for all that he gave them, it couldn’t compare to the efforts he made for different charities through much of his life. All in honor or a promise from his youth.

Back in 1966, Monty gave an interview where he explained, “When you have a job, you’re satisfying yourself. When you’re doing charitable work, you’re doing something for someone else. There’s no reason to wait for the ratings, because you know instantly in your heart how you did. Community work is open to everyone. You can’t be fired and every contribution, whatever it may be, is acceptable.”

Author Adam Nedeff, who has written quite a number of books on game shows as well as the forthcoming biography of Monty, The Big Dealer, explains that the host felt his role on Let’s Make a Deal was an effective place to launch his charity work. “Being the host of a hit game show gave Monty a platform where he was in demand to host fundraisers and telethons,” Adam details. “And he did every one of them that his calendar would allow him to do.”

A Need to Help Others

In fact, Monty’s family joked to Adam — though it’s hard to determine if they were really joking — that even vacations became an excuse to be involved with charity work. If they were intending to spend a week in Hawaii, day one of the vacation would have Monty going to the local ABC affiliate to shoot promotional spots and from there he would visit a children’s hospital as a goodwill gesture — and write a check for them. “That’s what their vacations always looked like,” he laughs. “They always turned into a philanthropic effort.”

All of which stems back to the time when Monty was a kid. Born in Canada in 1921, his family seldom had much in the way of money.  It’s a situation that didn’t change as he became a teenager. As Adam explains it, Monty was a child genius and graduated from high school at the age of 14, but because the family couldn’t afford to send him to college, he started working to earn some money.

Says Adam, “Monty is on his hands and knees scrubbing the floors of a shop when Max Freed of the Hercules Manufacturing Company, and big into horse racing, comes in. He sees Monty and asks why he isn’t in school and is told that he can’t afford it. Max says, ‘Come to my office tomorrow and let’s talk about this.’ Next day they sat down and Max told him that he was going to pay for his college education, as well as his food and board. But there were two conditions. First, Monty had to maintain an A average; he wanted to see his report card every quarter. Second, he had to do this kind of thing for somebody else somewhere. So that’s where Monty’s need to give to others came from. He ended up going through college on this guy’s dime and it changed his life.

“That promise,” he adds, “guided so much of what he did. So did the fact that he grew up without money. His kids told me that that part of his life never went away. They said, ‘We lived in this nice house in Beverly House and our dad would complain sometimes, because he would look at the portion sizes at dinner and say, ‘Oh my God, you made too much food. It’s all going to go to waste.’ Or he would say, ‘Don’t you dare walk out of a room and leave the light turned on.’”

Monty’s mindset from being poor was that even when he had money, he tried not to spend too much of it — and it wasn’t about hoarding. Adam points out, “Monty looked at money in terms of what could be done with it and that inspired him to hold back as much as he could to give away later. He and his wife had enough money that they could go to a fine restaurant for every meal of every day, but rather than do that, they cooked at home. That way he could write a bigger check for Variety Club or whatever other cause it might be. As Monty’s daughter put it, he simply could not say no to something. Monty had to write a check anytime he could.”

As far as Monty was concerned, there simply was no other choice. He’d made a deal.