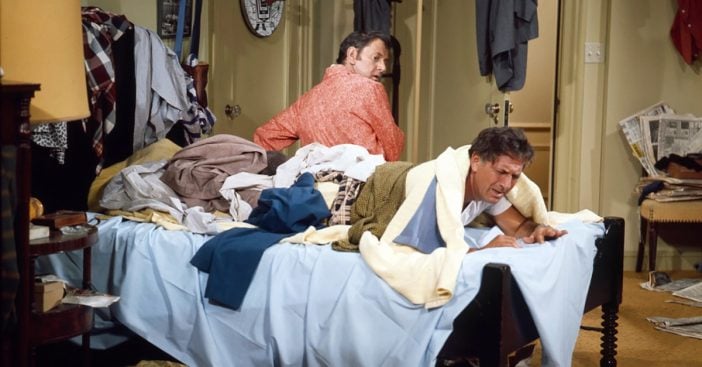 The Jack Klugman and Tony Randall version of Neil Simon’s The Odd Couple, which ran from 1970 to 1975 and is currently celebrating its 50th anniversary, really played up the conflict between the slob and his fastidious counterpart. And there probably wasn’t a better example than the bedroom of Klugman’s Oscar Madison — the band of Randall’s Felix Unger’s existence — which the producers truly believed was one of the show’s secret weapon.

Explains producer Jerry Belson, “If you think about The Odd Couple, you’ve got neat and sloppy. In the play it worked fine, because Felix moved in, but in the series it was going to be for five years. How do you show the sloppy part when Felix would have cleaned it up? This was a major problem and the answer we came up with seems to simple now. We would have Oscar have a messy room. That’s it. Believe it or not, that didn’t occur to anybody, especially we the creators, until much later. Otherwise, Oscar would keep messing it up and Felix would be cleaning it up for five years. So we created this island of filth he called a bedroom.”

Filmed in Front of a Studio Audience

Which actually played beautifully with a live studio audience. In season one of The Odd Couple, the show was shot single-camera on film, like a movie. There was no audience and therefore nothing for Klugman and Randall to play off of. That changed in season two when the decision was made to go three-camera, in front of an audience, shooting the show like it was a play.

Points out producer Garry Marshall, “I wanted that all along, but I didn’t have the power to do anything about it. Tony and Jack had the clout, so they managed to pull it off. The shows just got better after that.”

For his part, Klugman explained when the show was in production, “We spend three days rehearsing the show. We sat around a table the first day. We tore the script apart. We took out all the jokes and put in character. The only reason we leave in any jokes is for the rotten canned laughter. I hate it. I watch the shows at home, I see Oscar come in and he says, ‘Hi,’ and there is the laughter. ‘Hey,’ I think, ‘what did I do?’ I hate it; it insults the audience.”

Pop culture historian Geoffrey Mark points out, “Tony Randall felt Neil Simon needed an audience’s response, and here you’ve got two stage-trained, Broadway actors week after week. It’s not like making a film. He didn’t want The Odd Couple to be put in the same category as children’s entertainment like The Brady Bunch or The Partridge Family. He wanted it to be a serious contender as a sitcom. He wanted it to be adult, funny, witty and the real laughter of an audience.”

This brings us back to Oscar’s bedroom and the response the audience had to it. Yes, his room was a mess in Season 1, but it almost became a character in its own right beginning in Season 2. Now go back and watch episodes from that season onward. Pay attention whenever things shift to Oscar’s bedroom. You’ll probably notice an interesting response from the studio audience.

Explains writer/director Frank Buxton, “We used to screen off the sets we weren’t using, so the people in the studio audience would concentrate on, say, the living room. Then, when we got ready to do a scene in the kitchen, we’d pull the screen away, move the camera in and start rolling. When we did Oscar’s bedroom, we would roll the cameras, the guys would get into position and then we would roll away the screen as we said, ‘Action!,’ so we started with a huge lift from the audience. There’s a big initial reaction in those scenes to the bedroom, and that’s the reason for it.”

See the interesting factoids you pick up from Do You Remember?