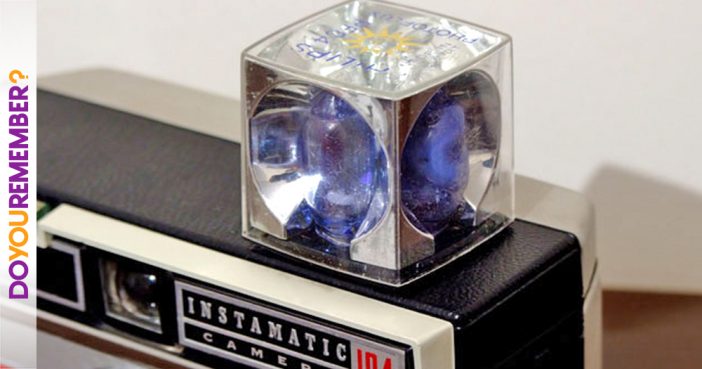 The Instamatic.  A classic camera so many of us had as kids. Snap a photo and it had a hollow, plastic, toy-like click sound. Rotate the wheel on top to forward the film (on some cameras there were levers) and you’d be ready for the next shot. You know that the film inside would wind, because a number would change on the outside of the camera. But often you didn’t remember the type of film you were using – it could have been a 24 or 36 shot roll. You couldn’t remember if it was black and white or color, negatives or slide film. And you also had to keep track of whether it was outdoor (100 ASA) or 400 for indoors or something in between. It was a lot to keep track of, actually, yet millions upon millions of pictures were successfully taken with them.

No camera was complete without a flash. And they came in many forms. Single blue bulbs that flashed once, a Flip flash, series of bulbs in a row that snapped to the camera, and those Magicubes which gave you 4 shots per bulb. Perched on top of the plastic camera was a square cube. 4 flashes around one bulb.  Take the photo and the plastic would practically melt with the heat. And in the haste to get some more shots in, kids would inevitably grab a hot, freshly burned bulb and get scalded.

I remember that on the smaller thinner cameras that were to come later like the Kodak 192 that used smaller film cartridges, there was an extender for your Magicube, presumably to minimize red-eye from the flash.

These experiences may not have been technologically significant by today’s standards. But they were pretty neat for us, and the rite of passage as a budding photographer, pre-digital photography.

You can ow your own by making a purchase on Amazon

Previous article: DYR Today, November 28
Next Post: Guess What this Crazy Invention Was Used for?