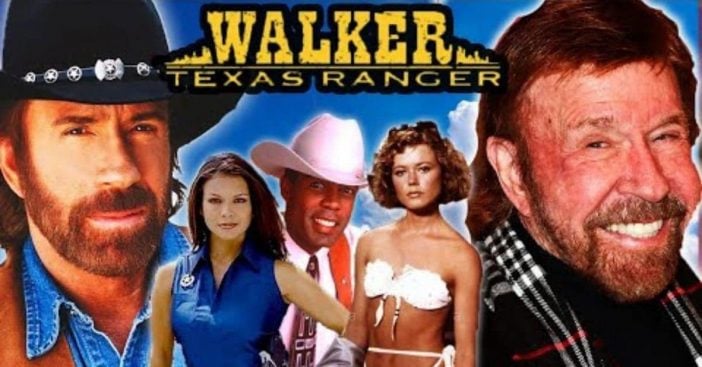 Alright, Let’s kick some butts! Nothing beats tuning in on Saturday nights to watch some good old-fashioned martial arts! Chuck Norris was, Walker, Texas Ranger for its entire run from ’93 to 2001, and although the acting was sometimes campy, the plots always similar and often far-fetched, this show was a roundhouse kick of fun! We knew from the get-go who were the good guys and who were bad. Most villains on the show drove Fords, while the Rangers and company drove Chevrolets. But Chuck delivered on his promise of a show that reflected good family values. It was a black belt in handling serious timely issues like gang violence and drug abuse while respecting other cultures and religions, a delicate line for such an action-packed show.

Let’s see what the Rangers got into after cleaning up the streets… aaaaand, action!

Cordell Walker, a Dallas-based lawman who prefers fists to firearms, and only uses force when absolutely necessary. Walker was diverse and mixed Native American wisdom with some impressive martial arts ability. Chuck Norris single-handedly brought the show to cult status, doing everything from starring in it, writing several episodes, and even singing “Eyes of a Ranger,” the theme song of the show. It was used from season two onwards.

RELATED: 11 of the Most Awkward “Very Special Episodes” in TV History

Chuck became Chuck in 1958! After joining the U.S. Air Force, and while in South Korea training, obtained the nickname, Chuck. While awaiting his acceptance to the Police Force in California, Chuck opened a martial arts studio and began doing demonstrations and competitions.  In 1968, Norris won for the second time the All-American Karate Championship and began a working and training friendship with Bruce Lee, who was already a star in The Green Hornet. This led to his breakthrough in the entertainment world, as Bruce Lee actually cast Chuck Norris in the film, Way of the Dragon because he was one of the few who was fast enough to take him on.

Another classic action flick of his before his Ranger tenure, was 1986’s The Delta Force starring him and Lee Marvin. I mean, that bike of his was killer! Following Walker, Texas Ranger, he reprised his role for the 2005 reboot tv movie Trial By Fire, but really began to ease off the gas. Most of his roles in the 2000s are cameos, including a hysterical thumbs UP in the 2004 film Dodgeball. I’d say his best and most RangerLike recent movie was 2005’s The Cutter.

Chuck Norris became an Internet sensation in 2005 with, Chuck Norris facts! They were satirical factoids about the actor, namely his toughness.  An example being, “Chuck Norris doesn’t read books. He stares them down until he gets the information he wants.” At 80 years old, he’s still kickin’, we last saw Chuck Norris in the 2020 version of Hawaii Five-0. And you can still catch reruns of Walker, Texas Ranger pretty much anytime you want! Heck yeah.

James aka Jimmy was Walker’s partner and the second half of this Ranger Team. Genuinely kind-hearted and especially helpful with any technology-assisted arrests, this was one of the best duos since Starsky & Hutch. You may remember seeing Clarence in a lot back in the day, his first TV gig was on Diff’rent Strokes in 1981,  and a huge break of his was another law enforcement gig as Officer Benjamin Webster in the hit show CHiPs. For more on the rest of that amazing cast, check out our CHiPs Deep Dive after this! Clarence also held a prominent role in the Andy Griffith-led series, Matlock.

Beyond Walker, Texas Ranger, he had two fantastic roles in huge blockbusters, as the terrorist computer expert in Die Hard; and before that, Lieutenant Marcus “Sundown” Williams in Top Gun. In his mid-60s, he’s still at it, just finishing a film called The Driver where he co-starred with Revenge of the Nerd’s Robert Carradine.

Alexandra Cahill-Walker is the district attorney working closely with the Texas Ranger, with some great after-work chats taking place at CD Parker’s. At first, she was Walker’s courtroom nemesis that frowned at the brute force necessary to take down the bad guy, but she eventually caved to Chuck’s Charm, and they married in Season 8.

Beginning her career as a model and spokesperson, Wilson’s biggest early break was a mainstay role on the prime time soap Dallas as April Stevens Ewing. Her character was gunned down in the final season during her honeymoon with her new husband Bobby Ewing. If you loved that series, we have an entire video dedicated to it for you to watch next! Sheree still acts on occasion but has also created a line of beauty therapy skincare products. Today in her early 60s, her latest film, Flip Turn is scheduled for a 2021 release!

CD Parker is a retired Ranger and owner of “CD’s Bar and Grill”. He’s pretty close with the rangers, even receiving the nickname ‘Big Dog’ from Jimmy. He’s also the only character who refers to Walker by his first name consistently. Noble Willingham took over the role after Hee-Haw Star Gailard Sartain performed it for the pilot. Thank goodness for the addition, too, as Willingham was the only native Texan to have a starring role on the show.

Willingham was teaching economics at a Houston High School before he followed his dream of becoming an actor. He auditioned for a part in the texas-filming The Last Picture Show and the rest is history. Appearing in more than 30 feature films, including a fantastic role as Gen. Taylor in Good Morning, Vietnam, he also had guest-starring roles on loads of hit shows, including The Waltons, and AfterMASH  He even helped kick off the Tim Allen-led Home Improvement as THE John Binford in 1992!  His role in Walker, Texas Ranger was one of the last roles of his career as he passed away in 2004 at age 72.

Raymond Firewalker, or Uncle Ray, was Walker’s paternal uncle, a Native American Cherokee who raised Walker after his parents were killed.  Mainly a political activist, he spoke and marched for Native American causes.

He also established a solid career as a country music singer where he collaborated with amazing artists such as Jackson Browne and Willie Nelson. In 1988, he got his first TV gig on an episode of MacGyver. Westerman also had a recurring role on The X Files. Westerman sadly died in 2007 from complications of leukemia at the age of 71.

Sydney Cooke is one of the newer Texas rangers and brought a new flavor and presence to the show! I always wanted Sydney and Gage to get together, but maybe Sydney was just too cool for that. Her career started off with intense ‘fame,’ with a great role as Nicole in the TV series rendition of, Fame. Soap opera fans may remember her as Karen Taylor in 132 episodes of The Young and the Restless as well.

But, prior to serving up her acting chops, she also had a music career in the ‘80s, which was actually quite impressive. Her song “Trouble” hit #1 on the Hot Dance/Club Play chart, which also climbed to #35 on the Billboard Hot 100.   In recent years, she has starred in several big-name shows such as Pretty Little Liars and The Fosters. Today in her late 50s, she’s still very active in the biz, living in Topanga, California.

Francis Gage is Sydney Cooke’s partner and added a school-boy charm to the show.  Judson’s first gig was in 1990 with  6 eps of As The World Turns but I remember him as the funny Hog Ellis in Major League: Back to the Minors. His role as Gage is probably his biggest role so far, but he’s still landing great roles, including one episode on Season 1 of the HBO Drama, Westworld.

At 51 years old, he spends his off time with his 3 kids and enjoys hunting, fishing, and Taekwondo! Very fitting for the show he may be best known for.

What a strong cast! We’ll never forget the action-packed episodes of Walker, Texas Ranger. Do you remember one specifically? What about when Walker helps run a karate school for disadvantaged kids and has to keep one from becoming a gangbanger? Tell us your favorite in the comments below, we wanna hear from you.