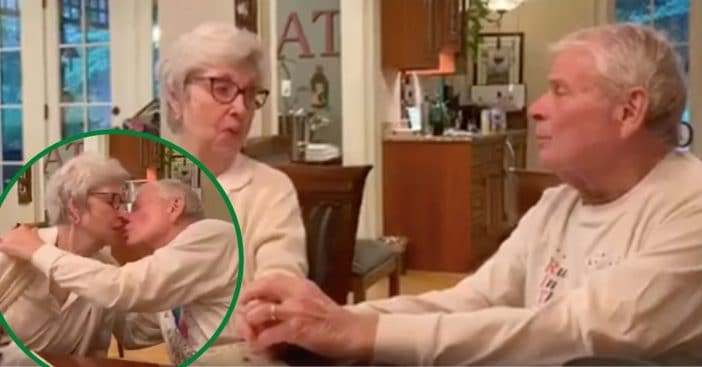 87-year-old Joe Korst was not about to let two strokes stop him from giving his wife the best 63rd-anniversary present yet. It’s been a tradition for Joe to sing Kenny Rogers’ “All That You Could Be” for his wife, Sharon. He had unfortunately lost most of his ability to speak and his memory as well due to the strokes, but he took it upon himself to relearn the song.

He relearned the song and lyrics in just five days and surprised his wife with the thoughtful rendition. Their daughter, Theresa Kostrzewa, recorded the whole thing and it’s so heartfelt. In the video, the couple is sitting at a dining room table, holding hands as they serenade one another.

He would experience his first stroke in late June and a second one just a month later. It was just several days before their anniversary on August 10th and Theresa encouraged her dad and speech therapist to learn the song for their upcoming special day. “He’s probably sung that song 150 times,” Theresa says.

Apparently, after Joe’s strokes, he was only able to say certain phrases like “I love you” and “I’m sorry.” While he wasn’t able to learn the entire song, he did get the most important part down perfectly. “When we sent the video of them singing, it was awesome for everybody. It was so sweet.”

His secret to a long and happy marriage

Of course, this story captured the hearts of the staff at WakeMed, a rehab center where Joe was a patient. Theresa recalls a moment where one of the workers asked Joe what his secret was to such a long and happy marriage. “He says, ‘Love the hell out of your wife.'” He tells people, ‘I’m 63 years in love.’ He just has always unfailingly loved my mom and lets everybody know it and everybody see it.”

“My mom knows she’s been blessed to have Joe Korst love her her entire life. To have him be able to sing that gave her a feeling that everything’s going to be OK, no matter what happens, we’ve got this.”