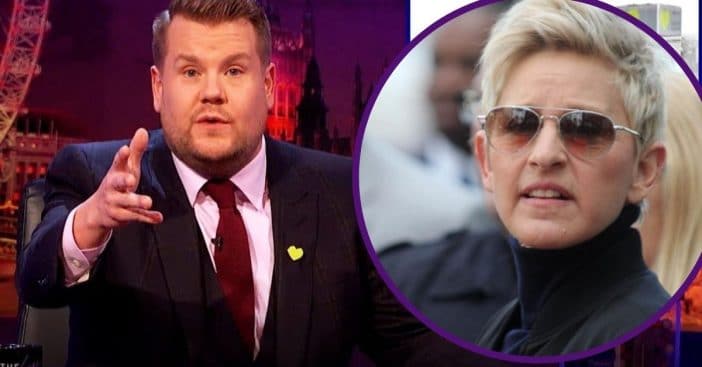 Reports are now saying that James Corden may be in line to replace Ellen Degeneres on her TV show following toxic workplace allegations. According to The Sun, NBC insiders say that Corden was seen as “the long term successor” to Ellen way before these allegations even arose. NBC Entertainment Chairman Paul Telegdy is part of the executive team overseeing these claims of a toxic work environment against Ellen.

Telegdy is also in charge of making the decision on Ellen’s future in show business. He says that he is a “huge fan of James” and has him “‘high on his wanted list for talent and a long term replacement for Ellen.”

“This issue has fast tracked everything and made everyone look at the future today,” the alleged insider says. “James Corden was being eyed for Ellen’s job in the long term before any of this came to light. Now this shocking new development places a spotlight on the next step. James and his team have been trailblazers in modern TV, taking the once considered graveyard chat show slot into a cutting edge format with huge online, social media and global recognition. In five years he went from unknown to A-list star and creative.”

The source continues, “Currently his CBS deal is only contracted until 2022 after he turned down a five year deal. Paul is a huge fan of what James does on screen. He already has a huge devoted audience, global appeal and is loved by Hollywood. Replacing Ellen was always going to be a tough challenge, but he is a natural fit and easy transition. James would freshen up daytime and with a free hand would be allowed to build a new afternoon era.”

These allegations have been a long time coming

Ellen is currently facing allegations of ignoring/allowing racism, bullying, and sexual harassment on the set of her daytime talk show. Allegations of her own, personal behavior have been surfacing since March this year.

Previous article: Did You Know Charms Candies Ended Up As A World War II Tradition?
Next Post: The Evolution Of Popcorn Made On The Stovetop — Photos Show We’ve Come A Long Way