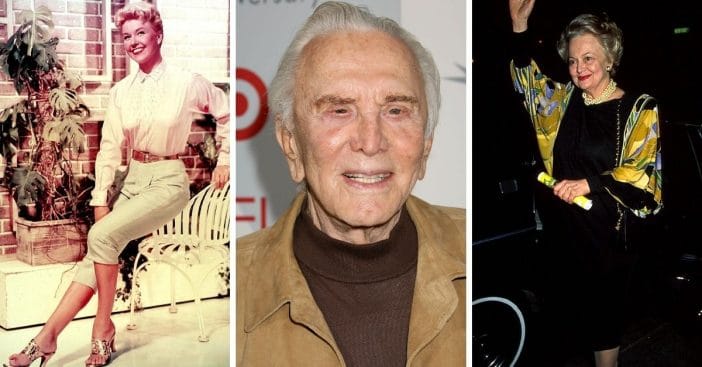 There’s no doubt that 2020 has been a very tumultuous year. With the coronavirus, mass protests worldwide against racial inequality, and sudden deaths, it’s been a lot to take in. Some of the last-living legends (DYR favorites, too) have passed in recent years and we’d like to take this moment to honor them.

Some of these legends include Doris Day (97), Kirk Douglas (103), and most recently, Olivia de Havilland (104). These legends all died this year and we’d like to take a moment to remember them, their careers, and the impact they had on all of us throughout the years.

Kirk Douglas, born in 1916, was an actor, producer, director, philanthropist, and writer. He grew up living an impoverished childhood but went on to become something extraordinary. As both an actor and philanthropist, he received three Academy Award nominations, an honorary Oscar for Lifetime Achievement, and the Presidential Medal of Freedom. As an author, Douglas penned ten novels and memoirs. Douglas is also ranked No. 17 on the American Film Institute’s list of the greatest male screen legends of classic Hollywood cinema. He was the highest-ranked living person on the list up until his death.

Doris Day, born in 1922, was an actress, singer, and animal welfare activist. She began her career as a big band singer in 1939 but would achieve her first bout of commercial success in 1945. She had two No. 1 recordings, “Sentimental Journey” and “My Dreams Are Getting Better All the Time.” Day would go on to become one of the biggest film stars of the ’50s, earning Academy Awards, Grammy Awards, a Lifetime Achievement Award, and was awarded the Presidential Medal of Freedom.

Dame Olivia de Havilland was born in 1916 and the majority of her cinematic success ranged from 1935 to 1988. She was known as the last major surviving star from the Golden Age of Hollywood Cinema. Havilland was also the oldest living Academy Award winner until her death in July 2020. In addition to film, she was a gifted theatre actress and also worked in television, earning a Primetime Emmy Award nomination and winning the Golden Globe Award for Best Supporting Actress in a Television Movie or Series. Havilland also has two New York Film Critics Circle Awards, the National Board of Review Award for Best Actress, and the Venice Film Festival Volpi Cup. Havilland also received a star on the Hollywood Walk of Fame.

All incredible legends that we will never forget. They are all missed.