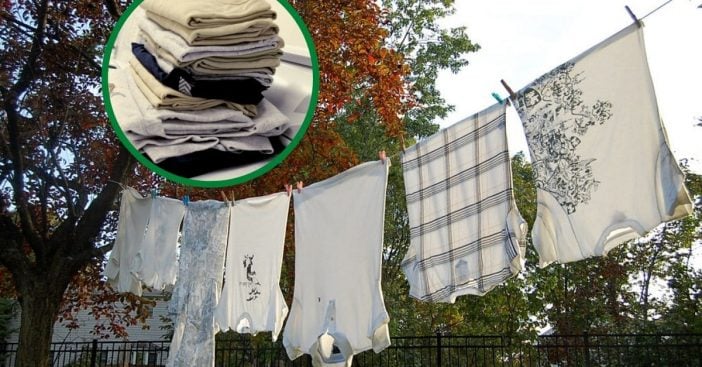 As new appliances rose to fame, typical household routines received a major overhaul. But some tasks still had some time-consuming steps that stayed preserved because they just worked. So, even as Maytag produced handy new washing machines for streamlined clothes cleaning, some elementary methods stuck around. One example is the clothesline, a universally accessible “dryer” crisscrossing properties through the ’50s.

After the washing machine did all the work dislodging dirt, water needed dislodging from clothes. Clotheslines did that in a very simple way that required minimal thought or attention – unless the weather started acting up, but even then not everyone cared. Design depended on where someone lived. They could have a string tied between two poles or trunks. Or they could have a simultaneously elaborate and straightforward pulley system.

Clotheslines at their simplest

John Nehrich reminisced about clotheslines on New York Almanack. His memories easily conjured up popular, relatable images featuring clothes draped over a line stretching between two upright poles, trunks, and the like. Usually, clips secured the clothing so it could sit folded over to dry and remain secure in any windy gusts.

RELATED: Do You Remember Using These Lamps During A Power Outage?

Even in these years of the clothesline’s heyday, certain traditions had to be observed. Working citizens wore very contrasting colors during the week; white shirts sat under dark suits and tucked into dark pants, and so on. Hot water made these colors bleed. So, even on the clothesline, fabrics got separated into lights and darks and this arrangement influenced where things got hung on the line.

A whole city of networking lines

Typically, clotheslines in those less crowded areas granted accessibility right from the ground. Anyone could walk right up to the setup and lay out or retrieve what they needed. But the city provided a different arrangement, so adjustments were in order. So, these lines involved a pulley system. This pulley system not only allowed people to hang all their clothes out easily, but it also helped with weight distribution.

Some crafty laundry managers used spreaders or spacers to account for the weight damp clothes put on the lines. These sat attached to the lower line, when a clothesline involved two parallel lines running one a bit over the other. By keeping the bottom low, that pulling kept the top line – with the clothes – taut so the clothes did not sag too low. Did you have any arrangements like these?