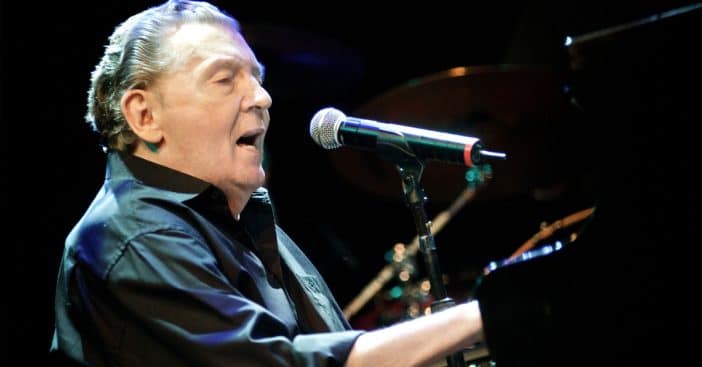 Jerry Lee Lewis suffered a minor stroke last year that would rob him of the ability to play music with his right hand. Now, he’s just recorded a new album and is back at it once more! When he first showed up at the Nashville recording studio, he had no idea of what was going to happen. He hadn’t played music since February 2019 and didn’t know if that was something he’d be able to do again.

It was actually the first time in five years that he had been in a recording studio to make music. Upon entering the studio, he tells his producer T-Bone that he didn’t want a piano in the room since he couldn’t play. They kept one in the room anyway and Lewis sat down on a stool next to it. Out of habit, his fingers began moving on the keys and suddenly, he was playing again.

Jerry Lee Lewis returns with a new album in progress

He would continue laying down tracks of music for two days alongside band members  Kenny Lovelace, James Burton, Lee Ann Womack and the McCrary Sisters on backup vocals. “I was in shock, for starters, that we were even there,” Burton recalls. “He went from saying, ‘I can’t play piano,’ to sitting down, picking up his right hand and playing. His family all welled up. That’s the power of love, you know?”

His wife says he’s healthier now more than ever

Lewis also opens up, according to Rolling Stone, about the pain he experienced last year following his stroke. “I’ve never experienced anything like it,” he says. “It was very challenging, and it was a very emotional experience. I didn’t know what was going on. I woke up in the hospital. And I just did some heavy praying, and tried to get back on the right track.”

Thankfully, Lewis is feeling much better now. “In reality, his health is better now than it’s been in the past five or six years,” says his wife, Judith. She reveals that Lewis no longer needs oxygen like he needed for the last three years. He doesn’t need any additional pain medication, just Advil or Tylenol when necessary.

After a successful return to the studio, Lewis now has a new goal in mind. Get inducted into the Country Music Hall of Fame. They usually announce inductees in March. We’re all rooting for Jerry Lee Lewis and this new goal of his! May he see continued health and well wishes.