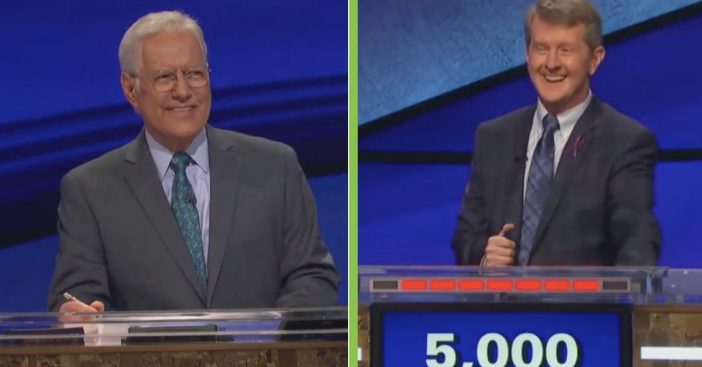 During the most recent showing of Jeopardy! The Greatest of All Time, Ken Jennings was able to “Ok Boomer” the Alex Trebek for the audience. Trebek reads, “A 2019 New York Times article says this two-word phrase ‘Marks the end of friendly generational relations.'” Jennings buzzes in excitedly and answers, “What is ‘Ok Boomer’?” Everyone erupts in laughter, including the in-studio audience and Trebek himself.

Of course, fans were quick to jump on Twitter and express their thoughts on the hilarious question/answer. Don’t think anyone totally expected “Ok Boomer” to be one of the answers, but it got a few laughs out of everyone!

Ken Jennings gets to ‘Ok Boomer’ Alex Trebek in a ‘Jeopardy! GOAT’ episode

The funny thing is, Trebek technically isn’t even a boomer! According to Google, the boomer generation is for babies born between 1946 and 1964. Trebek was born in 1940, which makes him part of the ‘Silent Generation.’ This generation of people, according to Wikipedia, is born between 1928 and 1945. So, if we’re being technical, Mr. Trebek is not really a boomer at all.

As for everyone else’s reactions? They’re pretty much all positive and lighthearted, it was a joke for all ages!

Never thought I’d see the day where Jeopardy would use the phrase ok boomer since that’s their primary audience. #JeopardyGOAT

“Never thought I’d see the day where Jeopardy would use the phrase ok boomer since that’s their primary audience,” Andrew of Twitter says. Definitely an unexpected turn of events!

““OK BOOMER” WAS AN ANSWER TODAY,” says Jenn from Twitter. She also uses a laughing gif to really convey how she’s feeling! We were all feeling that way, for sure.

It was a hilarious night full of big winnings

That was just a small part of the episode. Ken Jennings would soon take a massive 24,000 point lead after the first game of the night. Although the winnings were large that night, it remained just as silly, even to a point where Trebek turns to the camera and says, “Ladies and gentlemen, I’d like to welcome you to ‘The Jeopardy! Comedy Hour.'” Watch the hilarious segment below!

Click for next Article
Previous article: Olivia Newton-John’s Daughter Back On Social Media After Suffering Many Social Pressures
Next Post: American Firefighters Applauded As They Arrive To Help In Australia