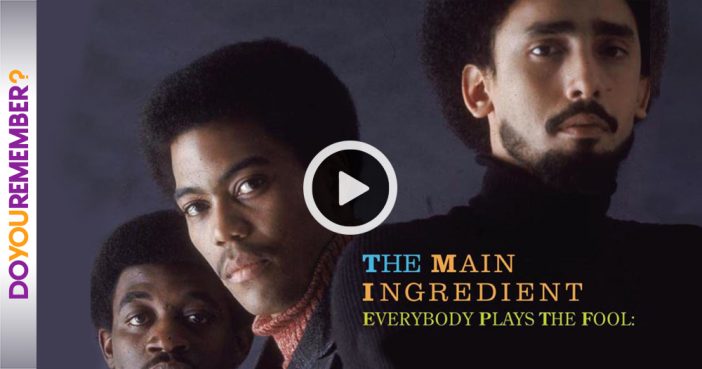 “Everybody Plays the Fool” is the title of a popular song written by J.R. Bailey, Rudy Clark and Ken Williams. The song was nominated for a Grammy Award in the category Best R&B Song at the 1973 ceremony.

The first recording of the song to reach the Top 40 in the United States was by the R&B group The Main Ingredient, a trio consisting at the time of Cuba Gooding, Sr., Tony Silvester and Luther Simmons, Jr. Their version of “Everybody Plays the Fool” rose to No. 3 on the Billboard Hot 100 chart in the fall of 1972, and was certified gold by the RIAA.  This version also peaked at No. 2 on the Billboard R&B chart and at No. 25 on the Billboard adult contemporary chart.  It was the group’s highest charting hit single

Ok, so your heart is broken

You say you even think about dying

Well, before you do anything rash, baby, dig this

Everybody plays the fool, sometime

There’s no exception to the rule, listen baby

It may be factual, it may be cruel, I ain’t lying

Fallin’ in love is such an easy thing to do

But there’s no guarantee that the one you love, is gonna love you

Oh, loving eyes they cannot see a certain person could never be

Love runs deeper than any ocean, it clouds your mind with emotion

Everybody plays the fool, sometime

There’s no exception to the rule, listen baby

It may be factual, it may be cruel, I ain’t lying

How can you help it, when the music starts to play

And your ability to reason, is swept away

Oh, heaven on earth is all you see, you’re out of touch with reality

And now you cry, but when you do, next time around someone cries for you

Hey, everybody plays the fool, sometime

Use your heart just like a tool, listen baby

They never tell you so in school, I wanna say it again,

Previous article: Guess Which Hollywood Darling This Little Angel Grew Up to Be?
Next Post: John Denver: “Grandma’s Feather Bed”