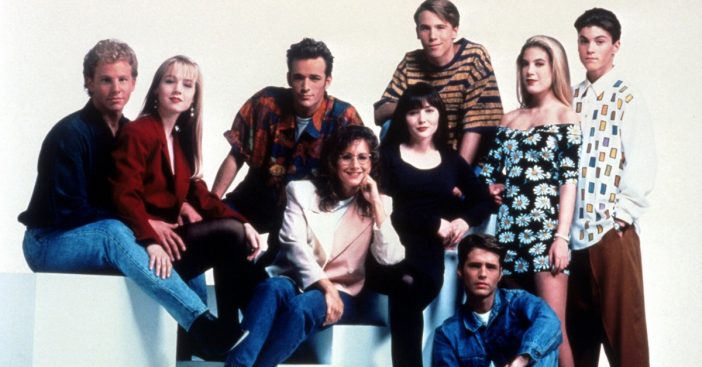 It has officially been announced that a revival project of Beverly Hills, 90210 is in the works! Recently, Tori Spelling had confirmed that a revival show was happening just a few weeks ago, but we have an official announcement and fans everywhere are rejoicing!

Most of the original cast members will be returning to the revival show, including Jason Priestley, Jennie Garth, Ian Ziering, Gabrielle Carteris, Brian Austin Green, and Tori Spelling. The group will be starring in six episodes in a series simply titled 90210. Original cast members Luke Perry and Shannen Doherty currently are not signed onto the project but news outlets say that “the door is still open” for them to get added to the lineup of characters.

Now, ready for the ‘big twist’ that the revival will have?

The official description of the six-episode series is the following:

“The core cast will all play heightened versions of themselves in a brand-new serialized drama — with a healthy dose of irreverence – that is inspired by their real lives and relationships. Having gone their separate ways since the original series ended 19 years ago, Jason, Jennie, Ian, Gabrielle, Brian and Tori reunite when one of them suggests it’s time to get a Beverly Hills, 90210 reboot up and running. But getting it going may make for an even more delicious soap than the reboot itself. What will happen when first loves, old romances, friends and frenemies come back together, as this iconic cast — whom the whole world watched grow up together — attempts to continue from where they left off?”

Tori Spelling was the first to give a sneak peek into the “description” of the reboot, revealing that the core cast will be playing heightened versions of their characters. Many were speculating what she meant by “heightened versions” but now we think we know! In terms of ‘first loves, old romances, friends and frenemies’ we can expect to see some much-needed soap drama, no?

Beverly Hills, 90210 originally premiered on Fox in 1990 and ran for a whole 10 seasons. It follows a group of friends from high school into early adulthood, witnessing all their highs, lows, relationships, and derailments. The series inspired spin-offs such as Melrose Place and Models Inc, and even a 90210 reboot in 2008 that ran for 5 seasons.

Be sure to SHARE this article if you’re excited about the new 90210 reboot!

Check out the interview below with Tori Spelling on the 90210 revival show:

Previous article: ‘A Star Is Born’ Is Coming Back To Theaters With Brand New Footage
Next Post: This Is Why Chick-Fil-A Employees Will Never Say “You’re Welcome”