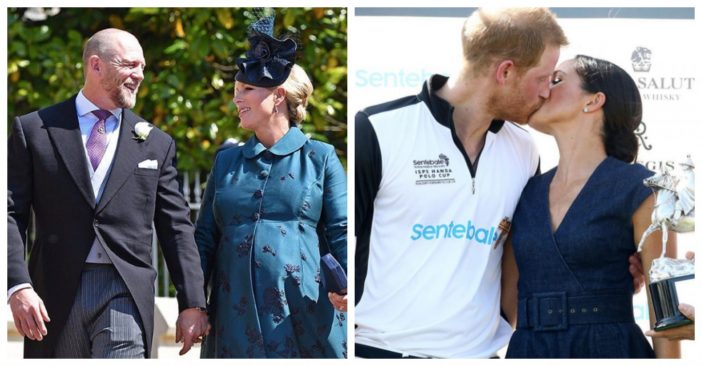 Would you believe us if we said that there was Royal protocol when dealing with how affectionate the Royal couples can actually be in public? While there’s definitely no official list of do’s and don’ts, Royal etiquette experts have spoken up about PDA amongst the couples and shared their thoughts on photos that have surfaced.

Since the beginning, it’s no secret that Duchess Meghan and Prince Harry love showing each other off. It’s also worth noting that Zara and Mike Tindall have been pictured multiple times sharing kisses and, for lack of a better phrase, Zara holding onto her husband’s butt. These photos have been analyzed and experts share their thoughts.

Myka Meier, Royal etiquette expert and founder of Beaumont Etiquette, reveals that there are no formal rules on PDA, but that the couples should use their best judgment when deciding to be lovey-dovey in public.

“Senior members of the royal family would likely not be told how to interact or when they can or can not show PDA and would be trusted to use their better judgment as to when it’s appropriate. The royals often adjust PDA to mirror the formality of the event they are attending. At a somber or more formal event, we are less likely to see PDA than at a casual event where it would be deemed more fitting,” Meier explains.

Meier also points out the photo of Zara Tindall grabbing her husband’s butt and reflects on that. She says, “It’s also important to note that when attending official events on behalf of the royal family, royals are taking on professional roles, versus being on their own private time, which the recent photos of Mike and Zara Tindall not on official royal duty would be an example of.”

Essentially, there’s no formal rule stating that there’s a limit on the affection the royal couples can show each other. Should they be mindful of it depending on the event they’re attending? Absolutely. But as far as not being on official Royal duty is concerned, they are pretty much free to do whatever they wish. Many of the other married Royals, such as Prince William and Kate Middleton, rarely display any public affection these days.

Be sure to SHARE this article if you thought this Royal etiquette article was interesting!

Previous article: View Adorable Photos Of Animals Getting Up Close With Wildlife Photographers
Next Post: Check Out The Inside Of Country Singer Jason Aldean’s $7.9 Million Home For Sale