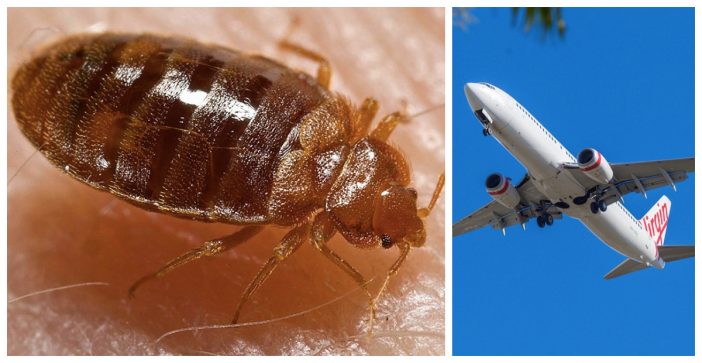 You can apparently encounter bed bugs on flights. Recently, passengers on Air India complained about bed bug bites, which then led to a grounding of flights between Newark and Mumbai.

@airindiain @sureshpprabhu @narendramodi_in Suresh Prabhuji – just arrived from New York on Air India 144 business class with family . All our seats infested with bed bugs . Sir , have heard of bed bugs on trains but shocked to experience on our maharaja and that too business pic.twitter.com/m2GnfOpTO3

Passengers and relatives of those who boarded the flight are outraged. They are reporting that they cannot get in touch with the airline about the situation. Additionally, many are upset that they paid $10,000 to get bug bites on a flight from the very seats they sat in!

A passenger named Kashmira Tonsekar spoke to The Hindustan Times, saying, “We alerted the crew who sprayed a repellent. After a while, more bugs started coming out from that and other seats.” Allegedly, passengers who complained about bug bites were moved into the main cabin where there weren’t any, but they had already been bitten.

@airindiain my wife and three kids flex business class AI 144 from Newark to mumbai; now they have bed bug bites all over their body; is this is what we paid $10,000 for???

The airline did release a statement about the situation, despite its frustrated customers not being able to get in touch with customer support.

“Air India is deeply concerned with a few reports of “bugs” causing inconvenience to its esteemed passengers,” Air India told NBC, “The issue has been viewed seriously and every possible step is being taken to closely inspect and further strengthen our system at every level to ensure that such isolated incidents of passenger discomfiture do not affect our consistent performance.”

@airindiain Air India team, are you going to look into this, this is very disappointing I can send you pictures, doctor has prescribed 10 days of medicine for my wife, this was supposed to be a vacation. They flew AI 144 leaving Newark at 2 15 pm on July 18 https://t.co/SWMFDl0yzT

The statement went on to say that, “Experienced experts have carried out extensive service on the aircraft from fumigation to overhaul of the upholstery/seat covers/carpets etc to ensure that passengers keep enjoying their in-flight experience with us as always without any complaint of inconvenience.”

According to sources, Air India has not turned a profit since 2007 and is up for sale. The new owner would be taking on $5 billion in debt. Thankfully, bed bugs do not carry diseases, but they can be found just about anywhere- even in planes!

Bed bug bites usually just look like a raised bump and are painless. Common bite locations include the face, neck, hands, and arms. Typically, no treatment is required for a bed bug bite, but if it’s itching like crazy, it’s best to apply some anti-itch creams and cool compresses.

Be sure to SHARE this article to spread awareness about airline bed bugs!

Previous article: Teacher Welcomes Her Students Back To School With Heartfelt Poem And Goodie Bags
Next Post: Studies Show That There Is Actually A Correct Way To Hang Your Toilet Paper