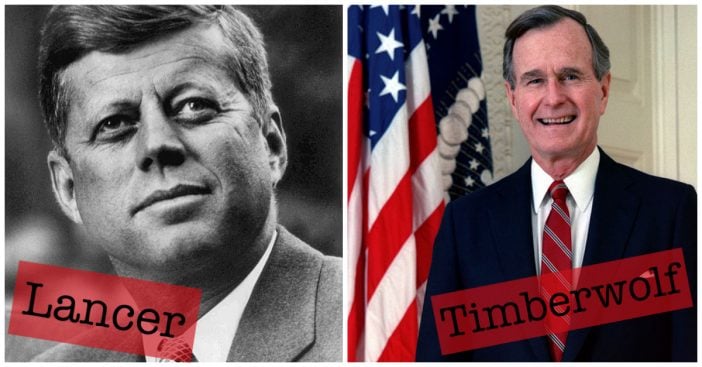 Did you know that the Secret Service gives code names to the President of the United States and their families? Can you guess what some of the past code names have been?

Read on to find out some of the most clever and iconic code names of past U.S. Presidents.

You might think rawhide is a more suitable nickname for a dog, but this was the Secret Service code name that belonged to Ronald Reagan, 40th President of the United States. His code name was a result of his love for ranching and his past appearances as an actor in westerns.

This code name was for Dwight Eisenhower. However, when he retired, he was known as Scorecard because he loved golf.

Lancer was the Secret Service code name for John F. Kennedy. His administration was often compared to the Arthurian legend of Camelot and he was compared to Lancelot.

Deacon belonged to Jimmy Carter because he was very religious and a member of the Baptist church. After he retired, he went on to teach Sunday school.

Bill Clinton had the code name Eagle. Everyone in his family was given a code name that began with the letter E. Hillary Clinton was given the name Evergreen.

This code name belonged to Richard Nixon. He left office after trying to cover up the Watergate Scandal; this behavior put him in the “searchlight” and led to his resignation.

This code name was for George H.W. Bush, but no one is sure what it means. His wife Barbara Bush was given the code name Tranquility.

When George W. Bush entered the White House, he was given the name Trailblazer. His previous code name when he was just the son of a President was Tumbler.

Barack Obama actually chose this code name after he got to choose from a list of names that started with an R. His wife Michelle is Renaissance, and daughters Malia and Sasha are Radiance and Rosebud.

Which of these code names surprised you? If you liked this article, share it with a friend!

Previous article: Spam Recall: More Than 220,000 Pounds Of Canned Meat Have Been Recalled Over Oral Injuries
Next Post: Brooke Shields Is 52 Years Old And Still Looks Absolutely Stunning In A Bikini